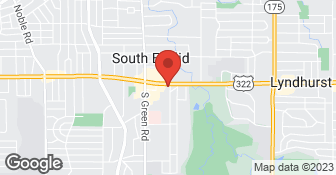 Abby Construction has been in business for 65 years. Call Us Today!...

Senior Safe of Ohio furnishes and installs equipment to help people with mobility issues to remain safely in their own homes.

Please email only: pstuart37@yahoo.com - We service interior and exterior home owners and commercial clients. We are owner operated and do not subcontract the work to other vendors. Our painting company focuses on detail and cleanliness. We will provide estimates and information about painting upon request. Thank you for considering our painting company for your home or commercial needs.

Thanks you for visiting our profile. We at Discount Quality Paving Co. look forward to working with you and we can't wait until you see the quality of our work. We have mastered the art of driveway resurfacing and paving. Asphalt or concrete we do it all. Please contact us for more information.

Approximately 4 months later we had a heavy rain. At that point we noticed the leak was still happening, not totally fixed. Called them today 9/22/16, Abby advised me they would have to charge me again to fix things. While on the phone with the owner, sounded as if people in the background were making jokes at my expense. No apology, seemed as if they were inconvenienced just by talking to me.

DESCRIPTION OF WORK
Hired Abby to put roofing materials to combat a leak in my kitchen. Put up some aluminum and flashing. Had 6 other companies come take a look at the work since then, they advised me that original job was not good.

Very good experience, service provider was punctual and very professional. had all of the information organized on paper and also had a symbol stating that they have been in business for a long time.

Do not use them. I have been calling them for months and they wont respond. My only alternative is to take them to small clams court.

DESCRIPTION OF WORK
They were supposed to stop the leak in my bedroom, cause by tuck pointing from chimney.

One of the banisters was rotten, and they did not notice it during their inspection of the stairs. They thought that they did everything that they were supposed to, but I did not feel like they did. However, they showed up on time, and did the job quicker then they said they would.

DESCRIPTION OF WORK
I used Abby's Construction to reinforce two stories of stairs. They put in new platforms and support post. They also put plywood on the first and second floor landings and tightened up the railings. They did everything to make sure that the stairs were safe. They also gave me an estimate to paint the stairs.

The service was good, but a bit pricey. They do exactly as they say, I really have no complaints about them or their work. They are very patient and have good quality work.

DESCRIPTION OF WORK
Abby Construction Co. took apart my floor at my home.