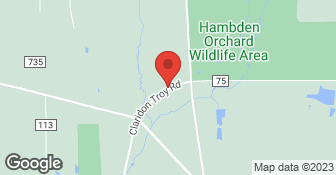 I called animal x because I had an animal defecating on my back deck at night.  I had animal x come out and set a trap despite thinking 70 dollars was pretty steep for the job, but I just wanted the animal gone at that point. He was very punctual and polite, and even offered to clean up the feces after everything was said and done. well.. we caught the animal "raccoon" that was hanging around in a...

DESCRIPTION OF WORK
trapped an animal that was lingering around at night.

Trapped all the raccoons that had been pestering us.

I found them on Angie's List. My tenants called me and said that they had a raccoon on the roof and that it was throwing garbage at them. He was successful and that is what he does. I have seen him since in my neighborhood and he seems to be a pretty common fixture here in our county. He was there when he said he was going to be there. He was on time and knew what he was doing. He had the equipmen...

DESCRIPTION OF WORK
Animal-X trapped a raccoon on my rental property. He also helped me out by catching a chipmunk in my house at the same time.

Ken inspected the house thoroughly and gave advice about animal entry points. He placed live traps outside the house and in some crawl spaces and periodically refreshed the traps. He also removed chipmunks that were caught and released them unharmed and legally. He is very knowledgeable. I expected a much larger bill.

DESCRIPTION OF WORK
Ken put out traps and caught several chipmunks that were getting into the house. He also put a screen on a roof fan vent where animals may have entered the house.

HE NOT ONLY REMOVED SQUIRREL FROM ATTIC, BUT HE ALSO REMOVED SOME BOXES FOR ME AT NO EXTRA CHARGE. EXCEPTIONAL WORKER. I WOULD HIRE AGAIN.

DESCRIPTION OF WORK
REMOVED A SQUIRREL FROM ATTIC.