General Remodeling
Basement Remodeling
Kitchen and Bath Remodeling
Homebuilders
Lighting
Fencing
Decks and Porches
Licensing
No License Required for Trade
All statements concerning insurance, licenses, and bonds are informational only, and are self-reported. Since insurance, licenses and bonds can expire and can be cancelled, homeowners should always check such information for themselves. To find more licensing information for your state, visit our Find Licensing Requirements page.
Business Details 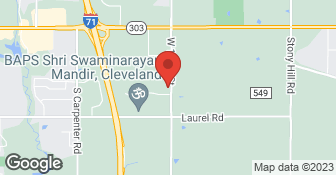 Moore Home Remodeling offers Handyman, Carpentry and General Remodeling services. From a siding repair to a full kitchen design and build, we can do it. As a general remodeling contractor, we cover a large range of services. Customers are often surprised by all the areas of home updating and remodeling we do. We look forward to "making your home your favorite place to be."

We are a family owned and operated electrical service contractor. We perform new work, remodel, & trouble shoot. When you have commercial or residential work that needs to be done quickly and with an eye for quality, look no further than “ Home Town Electrical Doctor”. We have the most highly-trained, industry-certified master electricians with years of experience working for both commercial and residential clients. Additional phone number - (440) 242-4002. Additional DBAs - Hometown Plumbing Doctor, MAS Electric LLC. Cost is determined by the job.

Everyone was fantastic. Dan came out the day after our first call to discuss our thoughts. He suggested we talk with an interior designer to give us an idea of how the bar we wanted built would fit in our space. Renee drew up the plans and Dan and his team made it come to life. Dan was willing to work around us doing some of the work ourselves like taking down the existing ceilings and re-routing ...

DESCRIPTION OF WORK
We wanted to remodel our basement. This included taking down a wall, extending existing drywall up to the beams, priming and painting exposed beams, custom built bar, back bar, and columns, painting and staining, and all plumbing.

I called and set up an appointment for Mr. Snyder to come to my house and give me an estimate to take a wall down between my kitchen and dining room.  He showed up on time.  He took pictures and said he was going to have to show them to his "engineer" to see if it was a support wall.  He called back about 2 weeks later (much later than he said he would) and told me that his "engineer" said it was ...

DESCRIPTION OF WORK
Mr. Snyder came to my house and gave me an estimate to have a wall taken down between my kitchen and dining room.  His estimate was between $2,500 and $3,000.  I went with another company that did the job successfully for $650.

Clement Construction, Inc. stands behind the estimate we proposed to the member. We take every precaution for our customers' safety and health. Safety wise, we determined that the wall is a bearing wall, and a certain size header is needed according to codes and load bearing weight above. Not all contractors do a thorough analysis. This house was built before 1978, and the United States EPA requir...
A

DESCRIPTION OF WORK
I used Clement Construction Inc. last summer to do some remodeling.

The work went very smoothly and they kept me informed every step of the way. I didn't have to do a thing. This is the best company I have ever worked with. They go out of their way to help you in any way they can.

DESCRIPTION OF WORK
My house is 22 years old. I wanted to sell it, but needed to update it. They took out the shower in one bathroom and replaced it with a tub/shower. They had to move a wall to do this. They relocated and replaced the sink and vanity in the other bathroom and put in new mirror and light bar, replaced the fan in the center of the room with a fan/light. They did all the plumbing and electrical, supplied all the fixtures, etc. Then they had to drywall and paint both bathrooms and replace the flooring. They cleaned up every evening, so I was able to continue showing the house to prospective buyers. In the meantime, a light bulb burned out in the bathroom of my new home (with 10 ft. ceilings). One of the men replaced that and also 2 floodlights outside my house. (N/C)