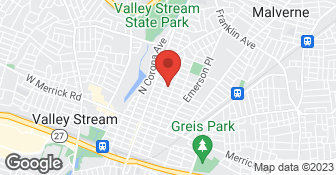 4 EMPLOYEES. NO SUBS. COST IS DETERMINED BY THE JOB. NO TRAVEL CHARGES. NO SERVICE FEE. EXTRA CHARGE FOR AFTER-HOUR SERVICE MAY APPLY. MAY CONTACT THROUGH EMAIL. ALSO SERVICE ROCKLAND, SUFFOLK, ORANGE & PUTNAM COUNTIES....

survey of my home

DESCRIPTION OF WORK
They delivered the survey as promised. In fact. The office had closed and Arek called someone from the road to go back and email me a pdf of the survey. They even sent me a hard copy of the survey. Their price was very reasonable and they were extremely response both to my emails and messages.

not very well, their survey did not correspond to the original survey performed on my home. they never contacted me to notify when they were coming so I could be present. I contacted them to notify that one neighbor had removed a stake to adjust it to his favor and needed them to return and rectify the placing of the stake. I was told they would need to charge me again to restake that one area. Al...

You have ordered the property stakeout based on independent boundary survey and that's what we did. Later you sent us a copy of your older survey. Our results correspond very well with your old survey. The difference is that the old survey shows the house based on foundation measurements and our house dimensions ant the setbacks were shown to the siding. There is a note on the survey to that effec...
A

Went perfectly. I contacted them after researching Angies List. Out of the 3 surveying companies I reached out to Arek responded the fastest by email. I gave them a quick message on the Scope of work and they sent a proposal and we scheduled an appointment for them to complete the survey. The survey was received via email by the date they said I would receive it. Followed by me picking the officia...

DESCRIPTION OF WORK
Survey for my Home

Arek was very responsive and proactive in trying to identify exactly what we needed so we wouldn't have to pay for unnecessary stuff. In our case, it later turned out that we didn't need the survey after all but I should say that in all contacts Arek followed up promptly and has helpful.

DESCRIPTION OF WORK
We needed an engineering survey with land elevations.

DESCRIPTION OF WORK
I needed a title survey and elevation certification.