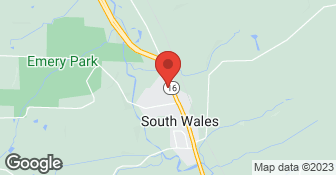 At Everything Outdoors we offer a fair payment program on every job to ensure customer satisfaction and job completion. The owner is present and involved on every job to avoid miscommunication. Specializing in structural support • Foundation repair and waterproofing • Re-supporting weak or rotten floors • Main beam and post replacement or alterations • Removal and replacement of broken or bent floor joists • All vertical and horizontal support repairs • Finished basements...

Provide landscape design and any property maintenance that needs to be done on your property. We are a young driven crew trying to prove ourselves. Do very good work and very detailed work. The customer is the most important part of any project. We will make sure to do exactly what you would want. Give me a call we do free estimates.

Graves Brothers Home Improvement has been locally-owned and operated in Upstate N.Y. since 1977. As one of the fastest growing businesses in the region, they offer their residential and commercial clients Roofing, Siding, Windows, and other Home Improvement services. Graves is a nationally-recognized contractor that has been repeatedly named a Top 100 company in the region as well as one of the top 500 home improvement companies in the United States, annual Angie’s List certification holder, countless product certifications, and more. Graves Brothers services Upstate and Western New York and the Finger Lakes Region from their facilities in Rochester, Buffalo, and Syracuse.

It went very well. The workers were friendly and the work was completed on time and our basement looks terrific. Their attention to detail was outstanding and we're very happy with the final product. The company was also very flexible and knowledgeable and suggested some changes to our original blueprints which helped settle some disagreements about the floor plan between my husband and I.

the overall quality of the work was poor We paid him approx 15k for our deck addition and replacement of existing boards - the deck and railings are not level, gates he built are falling apart and none of the miters line up. We called him several times to come out and fix it but he never responded The bedroom remodel was average at best. He didn't know how to remove or replace a drop ceiling so we...

Our job for this customer changed several times, the deck work included removing and replacing railings and floor boards therefore the issue with not being level was preexisting and in order to be corrected would require complete replacement at a cost much greater. The gates were built and reinforced as requested. The bedroom work included framing and installing an entry door as well as a closet d...
D

There were portions of the job that he said he could handle, but it became apparent that this was not the case, at least in our house. It's an older home, was not able to compensate so that result looked appropriate. He had rotating assistants, not sure but some appeared to have the greater knowledge base. Always seemed to be rushing (some damage to materials did occur). Ended up hiring someone el...

DESCRIPTION OF WORK
Helped with a partial bathroom remodel.

This customer had chosen materials that did not "fit" their home or this project and she chose to purchase said materials. Scheduling was difficult because she had to reorder different items several times. It may have appeared that I had different assistants, because of the material issues the schedule was changed and this project was being completed at the same time another was being worked on so...
A

Great! They were very professional and did excellent work.

Very prompt. I think only once did he call to say they couldn't make it till a little later in the day. They were the only company after getting 4 different quotes that actually was going to do the job correctly. Paid a little more but thats why we went with them, because they weren't going to skrimp on doing it right. Was very pleased with the timing, and the quality of work that was involved. Wo...

DESCRIPTION OF WORK
Repaired one side of wall on the garage foundation. Also replaced and fixed area where garage man door was located.

We do not offer weekly services to include lawn mowing or animal cleanup, we are also not in the business of heating or cooling.