Chimney Sweep
Chimney Repair
Chimney Caps
Gutter Cleaning
Cabinet Making
Masonry
Licensing
Insured
All statements concerning insurance, licenses, and bonds are informational only, and are self-reported. Since insurance, licenses and bonds can expire and can be cancelled, homeowners should always check such information for themselves. To find more licensing information for your state, visit our Find Licensing Requirements page.
Business Details 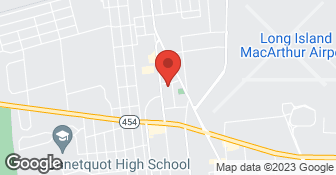 Long Hill Masonry has been providing a tradition of expert craftsmanship, quality and service for over 30 years. The company is owned and operated by Joseph Tavella, who himself comes from generations of masons. It is our goal to achieve the highest standard of quality in every project. We guarantee our workmanship for one full year, and most projects are payable upon completion of job take a look at our website at www.longhillmasonry.com

Here at All Island Pro Home Improvement we sustain our business on quality and integrity. With over 20 years of experience we are experts in Roofing and Chimney repair and installation trades. We are committed to quality from the beginning to the end of your project. There are no jobs too big or small! Contact us today for a free estimate. 24 hour emergency service. We look forward to earning your business.

The sweep went fine. Here's the other issues: After we bought this house, we brought them in for a cleaning and to so some repairs on the chimney. At that point, we thought they were a good company ... we had Peter and Paulie both come out to do work, and they were great. In recent years, though, I get an odd feeling about them. First, I have them back every year since they did the repair job on t...

My two sentences to describe Pauli of Advanced Chimney: Pauli's is Absolutely the Best There is! He was a godsend and savior for some issues I had with my house that day! Now the long version: On the day of snowstorm in March 2017, I saw a leak thru the fire place chimney and active snowflakes during the snow storm. I went thru Homeadvisor.com and called a few companies for evaluation and capping ...

DESCRIPTION OF WORK
The chimney needed a liner down to the level of furnace in the cellar (thru the stone wall) and a new cap top the top; we also had old vents that needed to be capped. He included also hooking the pipes in the cellar and cement back around the pipe. He also helped to fix a leak in the bathroom due to frozen gutters and extensive amount of snow/ice on the roof extension over the bathroom.

We have to chimneys one for the furnace and one for the fireplace. The service from two years ago was great and went smooth (2100 to replace the pipe connecting to our furnace). This month we needed to extend our pipe for our fireplace since my husband built up the second floor of our house. I called several places for an estimate and my husband felt most comfortable with these guys again (1400 to...

DESCRIPTION OF WORK
We needed our chimney pipe extended and a chimney cap for fireplace. Previously used (2 years ago) for a whole new furnace pipe.

They called us less than 24 hours before our appointment to cancel and didnt have another date available for 3 weeks. When the appointment arrived they wanted to cancel because we would not be home to meet them an HOUR before the set appointment time. We were home in plenty of time for the actual appointment. I will say, their call center was responsive to calls. The guy looked at the cap and inte...

DESCRIPTION OF WORK
We set up a chimney cleaning at a home show.

Advanced Chimney, Inc. cancelled our appointment for a chimney cleaning twice: once because they were running late with other appointments and couldn't make it out to us; then again because their truck broke down. We waited for them on two separate Saturdays and they cancelled, obviously not being very considerate of our time. When they tried to reschedule us for a third time, we told them no than...