CRICKET ON THE HEARTH

Fireplaces
Gas Logs
Appliance Repair
Chimney Caps
Licensing
No License Required for Trade
Insured
All statements concerning insurance, licenses, and bonds are informational only, and are self-reported. Since insurance, licenses and bonds can expire and can be cancelled, homeowners should always check such information for themselves. To find more licensing information for your state, visit our Find Licensing Requirements page.
Business Details 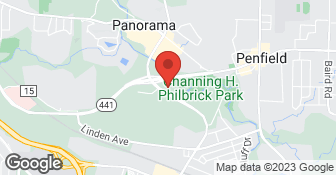 RETAIL FIREPLACE AND STOVE DEALER WITH OVER 40 YEARS IN BUSINESS. SERVICE AND INSTALLION BY OWN TRAINED EMPLOYEES. QUALITY PRODUCTS AT AFFORDABLE PRICES. ADDITIONAL HOURS - TUES, WED 10:00 AM-8:00 PM...

Felgemacher Masonry is a full service chimney restoration, repair, sweep, and lining business. We are licensed, insured, and a Certified Sweeping Company by the Chimney Safety Institute of America.

Nine years ago, Cricket on the Hearth installed my gas fireplace (FP). Now that we are ready to sell our house, a home inspection revealed that my FP does not conform to code. That's because Cricket did not install an emergency gas shut-off valve within 3 ft. of the FP, per code. (Note: This requirement existed when the FP was first installed.) I recently called Cricket and asked why this requirem...

ANOTHER company was hired to install the gas line. That company is responsible for the appropriate shut offs. Cricket was contracted to install the fireplace. I don’t know what led to the floor shut off not being installed. Sometimes a hole is not wanted in new floors by the home owner. Again, I don’t know but, I wanted to help. I explained two options to resolve the problem and asked for Mr. [Mem...
F

DESCRIPTION OF WORK
My wife and I went to their showroom to look at gas inserts. The salesman took us to a room with several working units. We saw one we really liked and asked about the cost. We were told $$3250. We explained that we had a 400lb. wood insert that would have to be removed and were told that would not be a problem for their installers. We put down a $500 deposit and set a time for the owner to come and check out our fireplace. When he arrived he told us that WE would have to get the old unit out ourselves. We explained what his salesman said, but he didn't care. He also said we would have to hire a sweep and have the chimney cleaned. I guess that makes sense, but the salesman should have told us that upfront so we could figure in the cost.The owner then completed his cost proposal. The final cost was $5500! A far cry from what we were led to believe in the showroom. It turns out that when we pointed to the unit we wanted the cost he gave us was only for the fire box, not the surrounding trim that covers the remaining fireplace opening. That would be an additional $690 !! Who buys just a firebox?? It's like going to a car dealership and pointing to the car you want, you're given a price and when you come to pick it up there are no wheels or tires because they're extra! We were very unhappy with the whole process. We were misled about the actual cost and the owner was not the least bit apologetic about it.

We apologize for your confusion over the complete price for an installed gas insert. We use as much information as we have available from the customer to discuss your options and pricing in the store but, never "bottom line" the job until we are on site to view the complete situation. The "500 lb" stove you have, did not have a liner and I indicated that the chimney would have to be swept before a...
A

After deciding to install a gas fireplace in the family room we shopped around for a unit that would takecare of itself as much as possible and look good doing it. The space was relatively small at 300 sq feet. We wanted the fireplace experience so we weren't looking at stove style heaters. After looking at the competition, we decided to shop at Cricket On The Hearth for two reasons: First, the st...

We chose to have the unit installed by a licensed plumber versus Cricket on the Hearth as we thought their installation price was high and the lead time a bit long.  From first turning the thing on, it never worked correctly.  Would shut itself off constantly and would make a little explosion type noise when first igniting. Called Cricket on the Hearth and spoke to Bob - he said that because we ch...

DESCRIPTION OF WORK
in 2013 Cricket on the Hearth sold us a Jordan XL fireplace insert manufactured by Kozy Heat.  The sales process was "ok".  We decided on this unit based on the sales guy Bob's recommendation and the ability to fit in our current opening of the existing woodburning fireplace.

DESCRIPTION OF WORK
Installed new fireplace doors that we purchased from them.