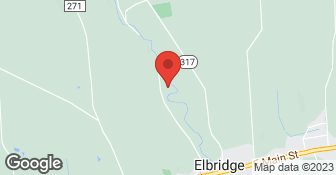 Family Business caring for Central New York properties for over 40 years. A. Christopher Sandstrom 1975 Graduate of the SUNY College of Environmental Science and Forestry. ISA certified Arborist #158 Registered Consulting Arborist #314 Modern equipment to handle all phases of tree care. 4-8 employees depending on season. All jobs done by our fully trained, equipped and insured crews....

A-1 Tree and Stump Service

A-1 Tree and Stump Service is a locally owned and operated tree and stump service.

I have called them 2 times to get 3 trees removed and they never called me back to setup an appointment. I did tell them I have used them before for removing a tree on this property. Their excuse was they were short handed and the person that does the estimates was working tith the tree removal crew.

DESCRIPTION OF WORK
Called to get an estimate to remove 3 trees.

The owner came right on time to do an estimate which he submitted to us in writing via e-mail. We accepted the proposal and scheduled the work to be done approximately 6 weeks later. It was a 2 day project; each day they arrived by 8 a.m. and immediately started work.The work was incredibly well coordinated; with the crew and equipment there was never an idle moment. No problems and everything fin...

DESCRIPTION OF WORK
We needed to have 10 large trees removed.

Hired Cayuga Tree Service twice for the same chestnut tree. One third of the massive tree fell during a very wet spring about 8 years ago. Chris was able to save what remained, balanced it and cabled it to another tree to prevent it from falling on the house in the event it toppled. The tree was breathtaking for another six years before succumbing to its disease. They came back and removed the sti...

Excellent crew, very attentive. We had him just trim some trees and he operated the big piece of machinery. His guys that he had around were asking if there's anything else they can end up doing or any other branches that we had while the whole thing was going down. It was very good.

It went perfectly! Professional, friendly service. And, they were quick! I had two other services quote on the project and this was by far the most reasonable. In addition, one of the other services quoted me $250 to treat my star magnolia for scale (two times); Cayuga Tree Service representative told me how I could do it for less than one-tenth of the quoted price myself! I highly recommend this ...

DESCRIPTION OF WORK
Took down a big pine tree by my driveway and ground the stump and trimmed an apple tree and a star magnolia tree.