Animal Grooming
Animal Boarding Kennels
Licensing
No License Required for Trade
All statements concerning insurance, licenses, and bonds are informational only, and are self-reported. Since insurance, licenses and bonds can expire and can be cancelled, homeowners should always check such information for themselves. To find more licensing information for your state, visit our Find Licensing Requirements page.
Business Details 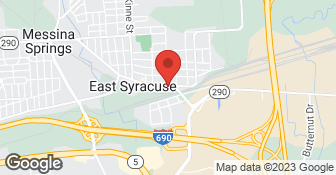 Best Paw Forward~ Where Best Friends come to play. We are more then just your average dog groomer. We are a full service doggie day care spa, where pampering your dog is our specialty. Whether your pooch needs a day of play or a scrub in the tub, we have exactly what your dog needs....

.Unfortunately, the next day he developed conjunctivitis in one eye. Had to take him to the vets and he was placed on antibiotics. Most likely from contaminated scissors from another dog with same. Costly grooming!!

DESCRIPTION OF WORK
Trim of face and hind end

I called A Best Paw Forward after having tried others. The woman on the phone was very cheerful/pleasant. I had seen some positive ratings on this groomer prior to the call. They are located on Main St in East Syracuse. The only problem with the location was that there was no sign on the business. I had to call when I was in the area to know exactly where they were located. The grooming on my gold...

DESCRIPTION OF WORK
Grooming of my 4 yr old Goldendoodle. My dog was long overdue for a grooming and had a rather long, curly coat. I asked them to cut him down to get rid of the snarls and knots. I also asked that they leave his ears and tail longer. Work was performed exactly as I requested.

.I have been using A Best Paw Forward for dog grooming/day care for about the last 8 months. I had used another groomer for several years but the owner was starting to get weird so I switched to these guys on the recommendation of my vet. So far, so good. It's easy to get an appointment, the dogs look/smell nice after grooming, their nails get trimmed (I mention this only because it was always hit...

DESCRIPTION OF WORK
Our two dogs were groomed, then spent the day playing with the other doggie clients.

We do not offer cat bathing or grooming.