Concrete Driveways
Concrete Pouring and Repair
Decorative Concrete
Pressure Washing
Licensing
Insured
All statements concerning insurance, licenses, and bonds are informational only, and are self-reported. Since insurance, licenses and bonds can expire and can be cancelled, homeowners should always check such information for themselves. To find more licensing information for your state, visit our Find Licensing Requirements page.
Business Details 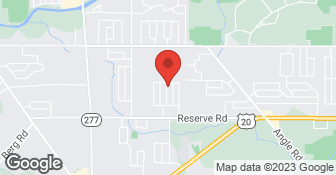 Romeo's Superior Home Improvements & Repairs is a full service residential construction company with a solid track record of quality workmanship and expertise in construction. Romeo Troncone is the owner and is a NY licensed Home improvement contractor with over 27 years experience in construction, and customer service. Award winning.

Real Help Decorative Concrete is local, licensed, and insured. We specialize in all flatwork concrete ranging from pattern stamped to acid stained concrete. During a job, the owner is on site to ensure the best in craftsmanship quality and customer care. With over 40 years experience and ever-changing designs, you are guaranteed top quality craftsmanship with unique and personalized concrete work. Real Help is leading the industry in custom aesthetics, affordability, and customer service. Real Help services both residential and commercial properties for all their concrete needs. With every job, quality is our top priority. Our organization offers a network of experience and professionalism. Real Help Decorative Concrete delivers projects on time and cares about the finishing touches. We give the best advice on our products, and every project is a work of art. From the simplest broom finished driveway, to the intricate stamped hand carved natural finish. If we haven’t achieved your dreams, we are not satisfied. The customer’s experience is the most important aspect of every project. From design to approval of color and texture selections and finally sealing and project clean-up. We will leave the project site exactly the way it was before with one exception; your newly transformed work of art. Be it your patio, driveway, sidewalk, or walkway, give us a call today and be the envy of your neighborhood tomorrow.

If your residential property is in need of a new cement project, it is best to go with a concrete contractor with a wide array of knowledge and experience in the field. Four Seasons Concrete has the skills, experience, and tools to complete your concrete project on time and on budget. Servicing Western NY area since 2002. Specializing in custom patios and pattern/stamped concrete. Fully insured and licensed Erie County. Call today for a free estimate. Up to $500 off any project. Ask for details.

The finished job is quite pleasing.  Only time will tell about the quality of the work, as we will have to wait (like any concrete job) to see if the preparations were adequate, and frankly I have confidence that they know what they are doing and it will prove to be a job well done by competent people.  However, (there is always a "however"), I emailed the contractor (Mark) a few days after the jo...

DESCRIPTION OF WORK
Poured stamped concrete around a new pool, as well as additional areas around a porch, pool house etc.

In summary, my neighbor's driveway looks great.  B & W concrete can make a driveway that is as smooth as glass.  However, this company needs to improve the infantile mentality and behavior of its workers.

DESCRIPTION OF WORK
B & W Custom Concrete did not actually provide a new driveway for my house.  They did so for my neighbor.  The old driveway next door was demolished on 8-20-2012 and the new driveway was completed and left to cure on 8-21-2012. On 8-21-2012, my elderly father, with whom I reside, noticed a chip at the foot of our driveway all the way to the side where our neighbor's work was being done.  Both he and I can assert that there was no chip there before work was commenced.  My father also noticed that the B& W workmen had made two cuts in the curb between our driveway and our neighbor's driveway.  This had been done on 8-20, the first day of work. Before I continue my story, a description of the two driveways is in order.  Both of them sweep down towards the street very close to one another.  The piece of curb between the two driveways is very short--only about a foot long.   On August 20, someone from B & W made a cut in the curb to separate our neighbor's old driveway from the little piece of curb.  This makes perfect sense, because the old driveway was being removed.  It was the second cut in the small piece of curb that had my father and I confused.  B & W had made a second cut, which separated our driveway from the little piece of curb as well.  Previously, the curb and our driveway had been fused.  We saw no reason for them to make a second cut in a spot which appeared to us to have nothing to do with our neighbor's driveway or the work that was going on there.  I had previously mentioned a chip in our driveway as well.  We believe that the chip had been made when B & W cut the curb near our driveway, which is to say that they damaged our property--not much, to be fair, but my father and I know that our driveway wasn't chipped before 8-20-2012. On 8-21, when we saw the team from B & W again, my father and I asked them about the cut and the chip.  We expected a rational explanation as to why a second cut was necessary and an offer of a dab of concrete to smooth off the spot where the chip was formed.    We didn't expect the raised voices, the preposterous accusations, the profanity, and the downright nastiness that we did recieve. One certain tattooed workman accused my father of wanting work done for nothing.  When my father told him that no, that wasn't the case and that all he wanted was a patch of material to repair the chip, the workman took a handful of concrete material in his hands and hurled it at my father's feet.  It's important to visualize the characters in this drama at this point:  a hulking, bemuscled blue-collar worker screaming at my stooped, seventy-one year-old father.  When my father asked again for some satisfaction for the damage to our driveway, the tattooed muscleman screamed at him:  there IS no damage.  That's b___ s___!  That's when I had had enough.  I told the hulk that he should never use profanity when addressing my father.  I asked him whether he would stand by quietly if anyone spoke thus to his father or mother. I suppose it would have been a fantasy to expect rational behavior from the tattooed hulk by this point.  I shouldn't have been surprised when he pointed at me and said, "And you, you just go back in your house!!"  But I was beyond surprised.  I was incredulous.  Apparently I need Mr. Tattoo's permission to stand in my own front yard.  Our neighbor has a very nice driveway now, and we are glad for her.  We like her!  However, I wanted to warn any Angie's List readers who might need concrete work that if you have B & W Custom Concrete from West Seneca, NY on your property, don't provoke the crazy guy.  I think he has the potential to become dangerous to others.  At the very least, he is the epitome of uncouth, and he is the worst possible reflection of the company for which he works.

The service went great. The price was reasonable and they did a great job.

DESCRIPTION OF WORK
They poured a driveway and garage pad.