Plumbing
Drain Cleaning
Garage Doors
Heating and Air Conditioning
Licensing
All statements concerning insurance, licenses, and bonds are informational only, and are self-reported. Since insurance, licenses and bonds can expire and can be cancelled, homeowners should always check such information for themselves. To find more licensing information for your state, visit our Find Licensing Requirements page.
Business Details 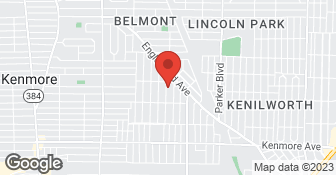 Precision Door services over 5000 Buffalo customers every year and has been providing service since 2001. We have a highly trained team of technicians and installers which work out of a real building and warehouse. Don't be fooled by uninsured, fly by night outfits using inferior products that give you a tail-light warranty. You should demand to see a warranty in print and every company's workers comp insurance that steps on your property.

master plumber and apprentice showed up exactly at the time promised.  Surveyed the work, and worked efficiently.  These guys did a very good job, and left no mess.  I think the price is very fair, and I would recommend them. I will use them again for any plumbing service.

DESCRIPTION OF WORK
Installed new faucet in bathroom sink, and repaired leaking p-trap in same.  (We supplied the faucet from Lowes, using a brand recommendation from the plumber. The faucet kit was about $55 )  Also, had a bath/shower mixing valve that was malfunctioning and not mixing properly.  They replaced the valve with a new valve.  They had a complete selection of parts on their truck, and stocked the new part.  Service was quick, and they were prompt efficient and courteous.  Very professional.

I used their services a couple of weeks ago. They did not charge me. I called them to take care of something. They were not able to do the work, but they gave me very good advise. It was nice of them to come out and not charge me for it. They had put in a vanity and the plumbing that goes along with the vanity a couple of years ago. That work was about 250 dollars a few years ago. They were very g...

DESCRIPTION OF WORK
I used A B & N Plumbing & Heating for garage doors. It was to take care of some garbage disposal.

I called for an appointment and was able to get one two days later. The office called that morning to confirm the appointment and two plumbers arrived shortly thereafter. The job took about two hours and the plumbers were very professional and friendly. I would definitely call again if I needed other work done.

DESCRIPTION OF WORK
Three underground storm drains were snaked out to the sewers. These have been plugged since we bought our house in 2009 - I have no idea how long they have not been functional. As of now, all three are working and we're very happy they were able to be successfully snaked.

I think they were the lowest of the three estimates that we received. My husband dealt with getting the estimates and I'm not sure what the price of each company was. However, their representative that came in gave us the impression that he did not know exactly as to how much it would cost. He thought that it would run into other problems and the cost could go up but he did not know. He started it...

DESCRIPTION OF WORK
We received an estimate from A B and N Plumbing and Heating Company a few months ago. We wanted to have a cold water pipe repaired as we were having some low pressure on our shower.