Home Security Systems
Heating and Air Conditioning
Licensing
Licensed
Insured
All statements concerning insurance, licenses, and bonds are informational only, and are self-reported. Since insurance, licenses and bonds can expire and can be cancelled, homeowners should always check such information for themselves. To find more licensing information for your state, visit our Find Licensing Requirements page.
Business Details 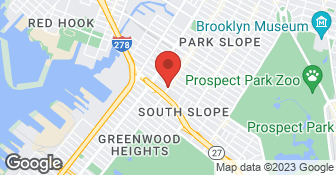 We are a full service licensed electrical contracting firm. We provide service to all residential, commercial and industrial clients. We have been in business for over 24 years and the owner, Kevin has been in the industry since 1979! Our services include design, helping you develop a quality, state of the art design and implementing that design by providing very qualified, clean and reliable installation. We specialize in developing your "green technology" for home and business. We assist you by eliminating the need to hire other contractors for alarm, home theatre, data/internet, whole house audio, CCTV etc. We coined a phrase over twenty years ago, "IF IT HAS A WIRE, WE DO IT"...

Fitchett Group LLC is an owner operated company lisenced and insured in the state of NY to install and repair security camera, alarm, and access control systems. As a one man company we aim to keep costs low and provide effective security solutions. We also do low voltage electrical, smart home setups, audio visual and point of sale systems.

Patriot Energy Solutions is a local Long Island Solar Energy Company. We help our neighbors save thousands in energy costs while increasing the value of their properties. Headquartered in Bay Shore, we control all aspects of your installation process. We don’t outsource a single function of your service, so you can expect timely installs and service. If you are looking for the best rates and service, then you came to the right place! We pride ourselves in offering a premium product and service, without overcharging our neighbors. We are committed to creating the best experience for our customers.

Air Rescue has been serving customers for over two decades! We have the experience and the technicians to handle even the most challenging tasks. All our technicians are highly trained and experience. We are also fully licensed, bonded and insured, so you can rest assured that you are in safe hands. With a full range of heating and A/C service solutions, we are here to take care of all your needs. Our highly trained technicians and customer support staff can help you make the right choice that ensures better comfort. Give us a call today or visit our office located at 957 Post Ave, Staten Island, NY and our representative would arrange a free in-home consultation. We will analyze the issue and understand your requirements and give you a free quote and estimate. While working our staff will ensure that they cause minimal disturbance to your everyday life while they are working, and protect your home from any possible damage and leave it spotlessly clean. So, call us today and ensure all-round comfort, all the year round.

Breen showed up at my house but refused to do the work. He billed me for it anyway. When I refused to pay for no work, he sued me and lied in court and won his case. (He implied he has "friends in court".) You already have the story with details.

DESCRIPTION OF WORK
Install a sconce

Excellent service. We had to change the electrical panels in our home due to insurance "recommendation" We called Breen Electrical since we knew they were licensed contractors and had dealt with them many years ago. What could be a stressful experience was made easy by Kevin Breen Electric. The job was scheduled, the work was done very professional and they took care to clean up. I will need addit...

He did not do the work and proceeded to bill me for it.

DESCRIPTION OF WORK
He was supposed to install a wall lamp.

Back in February, Breen came to my home to spec out electrical work. The job included a new electrical panel, a transfer switch for a whole house generator and and (1) 20 amp service run to the back yard. After a week had passed without any word from them, I contacted Breen via email. They informed me that they had not been in the office to put together a proposal, but that you would get back to m...

Breen was terrible.  Though the quality of work was fine, everything else was miserable.  First, a job they said could be done in a week took almost 3 weeks.  Second, they charged 50% more than Blaze (long story why we went with Breen instead).  Third, they left the place a mess.  If anyone is interested, I can email pictures of the absolute mess Breen left in a newly finished space -- garbage, wi...

DESCRIPTION OF WORK
We hired Breen to run a 220 volt line for an air conditioner and to move an electrical box.

The member is nothing less than a vindictive liar! We provided him with a service that was licensed and professional. The problem is the member hired many other contarctors on this job that were UNLICENSED! for him to say we forced him to pay 50% more in comparison to other contarctors in absurd, not in this economy. The member was the customer from hell, cancelled times we were to meet on job, pr...