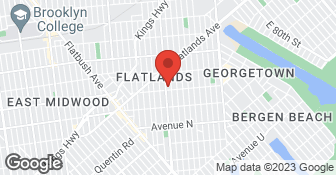 We install spray foam, cellulose and fiberglass insulation, along with fireproofing and firecoating services for homes and businesses, in both new and existing structure....

Kamco Roofing Inc is family owned and operated. We specialize all aspects of roofing including flat and shingles but our scope of work is not limited. Kamco also offers siding, skylights, gutters & leaders and cement work. We are also WBE Certified

Hi, My Name is Kazi. i am dong Any kind of construction. such as inside, outside, roofing, tiles, concrete etc..

Super Service Award Winner for the last 10 years running (2010-2019) in Roofing and Siding. We also offer services in Gutters, Remodeling General, Stucco and Carpentry! When you contract with Joseph Ashley, you can rest assured that we will arrive on time and work diligently and efficiently to ensure your project is done to your complete satisfaction, on time and on budget. Roofing Contractors. FREE LEADERS AND GUTTERS with every Owens Corning Platinum Protection Roofing System or with Full House of vinyl siding using Gentek Sequoia Select 0.046" thickness 16ft siding panel complete with our industries best contouring insulation minimum 1200 sq. ft.(a value of $1,000) Offer cannot be combined. For every roof or siding installation project over 12 squares a $50 donation will be made in customer's name to Wounded Warriors or St. Jude Children's Hospital. Award winning. Additional fax - (718) 948-0361. www.acjremodelinginc.com

We received an extimate from Ari  but had some difficulty dealing with him in coming to an accurate explanation of what was to be done and how.  After talking with Vauna, Peter, and the other workers, we were able to come to an accurate concensus on the job to be done.  Don't deal with Ari.  Do deal with the others.  They were very good.

DESCRIPTION OF WORK
We contracted with Air Seal to have insulation blown into the  walls of our house.

They were on time and very efficient. They said they would be here at 8:30 and they were.  They were clean and also cleaned up after themselves.  They had a foreman come and check on them halfway through.  It only took one day.  I was very pleased with them.  I also had others come in and their price was exactly the same.

DESCRIPTION OF WORK
I used Air Seal Insulation Systems for insulation of cellulose in my ceiling in the attic.

After about a year, I am having that roof torn off and replaced.  It has leaked constantly.  The foam has pulled away from the underlying material, leaving large cracks and openings.  Almost every ceiling on my top floor and several on the floor below will have to be repaired from the water damage.  The workmanship is simply astonishingly shoddy.  They came back twice to fix the things that I insi...

DESCRIPTION OF WORK
This company is one of the few that does sprayed foam roofing.  After speaking with Ari I engaged them to spray my roof.

When Ari came to the door, he stank so badly of cigarettes that I couldn't stand close to him. He looked around the area and took measurements, said he'd get back to me with an estimate. His estimate was higher than I expected but I had nothing to compare with. But a member of this List showed how shoddy the work was that this contractor had done, so I didn't use him. And his manner, in general, w...

DESCRIPTION OF WORK
No services performed. I only got an estimate. Then I joined Angie's List and saw how poor a rating he had.

Unfortunately Ari does smoke. However, that is beside the point for insulation. Sometimes, what a customer thinks will insulate their home and make a difference is not always accurate. We sometimes must propose more insulation than what a client desires or the insulation will be pointless. We would rather do the job properly or not do it. We are so sorry that the member was displeased.
D