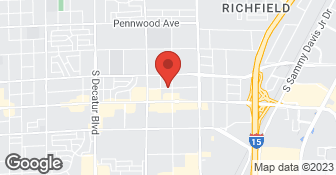 Plumbing Solutions of Nevada has been a leading Las Vegas Plumbing and Drain Cleaning Contractor since 2008. Plumbing Solutions can handle everything from emergency services on drain cleaning to water heater repairs, complete re-piping and bathroom remodeling. Our service trucks are fully stocked with parts to fix your common plumbing problems, and are available 24 hours a day, 7 days a week, including all holidays! We have built our reputation by providing our clients excellent service and value on a full range of residential plumbing services. You will find our plumbers to not only be professional, but also be courteous in diagnosing and fixing your plumbing problem quickly and completely. This prevents unnecessary expenses from additional damage caused by delays in fixing your plumbing problem....

Thank you, we will let Kenny know!
A

Went wonderful! The tech Kenny made my day so much better after he cleared my drains.

Thank you so much for your kind words!
A

Called Plumbing solutions of Nevada because I was having high water bill issues, got Kenny to come out to my property and he let me know what exactly was going on and gave me a great price! I definitely will be using this company again! Thank you so much plumbing solutions

They came out the next day and they were amazing. They were very thorough and responsive. The gentleman who came out spent hour to made sure were okay.

DESCRIPTION OF WORK
They discovered and checked the leakage of the meter box.

Thank you for such kind words. We'd be glad to help in the future. Just give us a ring!
A

The quality of work was a B only because of the damage they left. What they did well was that they actually completed the job and I have had no plumbing issues since then, for almost two years. The fact that I didn't like is that they kind of ruined my carpeting and vinyl flooring.Overall, it is okay. I am not upset about it considering the price and the urgency, everything was done fine.

DESCRIPTION OF WORK
They re-piped my whole plumbing. They re-plumbed my house.

My experience with him was good overall.  He was referred by another company.  He is a conscientious plumber.  I don’t know about prices for plumbers as I am so used to handymen.

The work went really well. The guys showed up on time every time and explained the process all the way through. They made sure to take good care of the yard even while having to dig it up. All the guys on the job were pleasant and professional and made sure every thing was working great before they left.

DESCRIPTION OF WORK
Replaced the main water line on the house

Plumbing Solutions of Nevada did a lousy (I would use another word however) job. I NEVER want to see this company again.

DESCRIPTION OF WORK
What a nightmare the plumber from this company was. Plumbing Solutions of Nevada was sub-contracted to do all the plumbing in our master bath total remodel, as well as minor remodel in two other bathrooms.. The master was to have a new toilet, all new fixtures in a newly enlarged shower, install two partial sunken basins on new granite vanity top, install new fixtures for basins, and also install new fixtures on new spa tub decking. Second bathroom was to has new configuration for the double sinks, as old configuration was only one drain in between sinks, reinstall old sinks and new fixtures on new granite vanity top. Plumber was to move the hot/cold water inlets to each sink and to split the drain and move to each sink. There was also a powder room which was to have a new sink and new fixtures installed on new granite vanity top. The powder room sink and fixtures were correctly installed, however the caulking around the sink basin had gaps in it, which he did not fix after being shown the problem. The master bathroom was the worst job!! The plumber first, told us that the thre function valve for our shower was incorrect, that it only worked the body jets and not the shower head and we were to order another shower valve. That would mean there would be TWO water valves in the shower. After conferring with Moen, and the loss of two days work, he was able to then understand and install the three function valve properly. But we wanted the shower controls on the side wall and not under the shower head, he told us that we would lose water pressure by having that far away. Untrue, we believe he just didn't want to do the extra work involved. He, without permission, put shut off valves on the hot/cold water lines to the shower (don't understand how that was a benefit since you would have to tear out the tile and wall to gain access to shut off the water). The he told the drywall sub-contractor he was done and the wall could be closed up. It was closed and the tile wall installed. But he NEVER openend the shut off valves and there was no water to the shower after the wall was finished. Then he convinced the contractor who hired him that the sink basins HAD to be mounted flush on the vanity top rather than having them sitting up partially on the top. The sinks had a decorative oil rubbed bronze hob nailing detail around the outside of the basin, that was intended to be exposed. Because he convinced the contractor that the fixtures water supply lines would not reach the extra distance, they had the granite contractor cut the opening, after the granite was installed on the cabinet, to allow for the basins to be dropped in flush with the top. The granite contractor was able to salvage the sink basins to have them sit on top, but when the plumber went to caulk around the basin he used white latex rather than clear silicone, so there was a bead on WHITE all around the outside of the sinks. He removed and did not replace one of the air lines to the spa tub and also removed the concrete support for the platform that the tub sits on (this would cause the tub to crack when used). In the second full bathroom, the plumber did move the drains. However, he ran the hot water line to the left hand sink and the cold water to the right had sink. When this looked wrong and we asked about it, his reply was "there is a temperature mixer installed in the wall". WHAT!! Whenever we asked why he did things wrong he would just look at us and would NEVER answer. Needless to say finally the contractor fired them and a new plumber came in a fixed ALL the problems. We wish they had been on our remodel from the start.

The quality of work was good. I had a bit of difficulty with a job that involved multiple visits due to the employee no longer working at the company, but the owner ultimately resolved it with me. I would use them again should I need plumbing work.

General Information
Licensed
Yes
Bonded
Yes
Insured
Yes
Free Estimates
Yes
Eco-Friendly Accreditations
No
Payment Options
Discover, MasterCard, Visa, Check
Senior Discount
10%
Emergency Service
Yes
Warranties
No
All statements concerning insurance, licenses, and bonds are informational only, and are self-reported. Since insurance, licenses and bonds can expire and can be cancelled, homeowners should always check such information for themselves. To find more licensing information for your state, visit our Find Licensing Requirements page.