Asphalt Driveways
Concrete Pouring and Repair
Pavers and Hardscaping
Hardwood Flooring Sales and Installation
Gutters
Decks and Porches
Licensing
Bonded
Insured
All statements concerning insurance, licenses, and bonds are informational only, and are self-reported. Since insurance, licenses and bonds can expire and can be cancelled, homeowners should always check such information for themselves. To find more licensing information for your state, visit our Find Licensing Requirements page.
Business Details 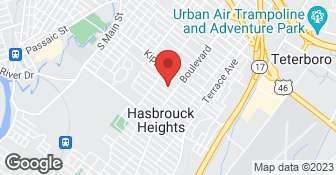 They were prompt and thorough. They did a good job. I didn’t have any problems with them. They came when they were supposed to. They left after cleaning.

DESCRIPTION OF WORK
I used Kelly Construction Inc. They did a wood floor in the garage.

DESCRIPTION OF WORK
The workers tore up our old garage floor and poured a new one. They did a very good job. They were very prompt. We are pleased with the quality of the work. Personally, I am most pleased that communication with the company was excellent (they were very easy to get ahold of), and that came when they said they would, and on time.

They did an excellent job.

DESCRIPTION OF WORK
They put in a whole new asphalt driveway with pavers on the sides.

FOR THE FIRST JOB THE TRENCH WAS MUCH DEEPER, I HAD NO QUALMS PAYING THE MONEY I DID FOR THAT JOB, BUT THEY DID NOT HAVE TO DIG AS DEEP IN THE BACK AND DID NOT TAKE AS LONG. I WAS GETTING RAIN IN AGAIN, AND THE THIRD PIPE THEY PUT IN WAS NEXT TO THE PIPE THAT WAS PREVIOUSLY INSTALLED AND HE CHARGED ME $600+. THAT IS WHAT HE SHOULD HAVE CHARGED ME FOR THE FIRST ONE.

DESCRIPTION OF WORK
WE HAD TO HAVE HIM DIG DOWN A COUPLE OF FEET TO DIG A TRENCH AND INSTALL A PIPE SO THAT THE WATER WOULD BE PUMPED OUT TO THE STREET. ALL OF A SUDDEN I HAD RAIN WATER COMING INTO THE HOUSE FROM THE REAR OF THE BUILDING. I CALLED HIM BACK OUT, THEY CHARGED ME THE SAME AMOUNT AS THE PREVIOUS JOB, BUT THIS JOB ONLY TOOK A FEW HOURS COMPARED TO THE FIRST JOB TAKING A WHOLE DAY.

Mr Kelly showed up to measure and estimate. He showed up with crew to perform work promptly and as promised. Upon encountering minor extra work, Mr Kelly did not try to stop to nickel and dime me and just did it. Mr Kelly was available to contour the driveway surface to my preference. Crew cleaned up after themselves and left as promised.