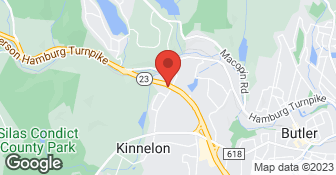 Gelormini's Auto Repair was opened on June 1, 1994. In the last 16 years the shop has expanded and transformed into an appealing place to do business. With over 28 years of experience, Mike Gelormini started the shop as the owner, technician, manager and basically handled everything in the day to day operations. Today, Gelormini's has a staff of 5 and are able to handle all of your auto repair needs. At Gelormini's Automotive, the focus is on our customers' concerns, customer education and promoting safety and maintenance. Customers enjoy a friendly, relaxed and helpful environment from the minute they enter the reception area. As a customer you will receive a complimentary multi-point Vehicle Maintenance Service Inspection and are presented with a printout of the factory service recommendations tailor-made especially for you and your specific vehicle. With this information you can then plan and make educated service decisions to keep your vehicle running efficiently, safely and for as long as possible.

**AUTO TOPIA, INC.** SPECIALIZING IN TIRE & AUTO REPAIR!!! We are a local certified, full service repair and car care center and pre-owned dealership serving our community with pride for over 20 years. We are licensed, insured, and bonded in the state of New York . Our reputation in our community is impeccable. We are recommended by the Better Business Bureau and by the New York State Department of Motor Vehicles, and all of our customers. We are certified to perform maintenance on any and all vehicles! All of our vehicles go through an extensive, 122-point inspection checklist and pre-owned vehicle prepping service before leaving our shop. We pride ourselves on selling only the best vehicles. We also offer Paint-less Dent Removal and Body Shop Estimates for your vehicle and full vehicle detailing to keep your car or truck looking like new! **ALL VEHICLES SOLD BY US ARE 100% RELIABLE** We are located at 233 County Line Road in South Amityville Village , NY , 11701 Daytime Contact Phone Number (631)797-0029 -- Ask for Tony

DESCRIPTION OF WORK
Bait and switch. Shady business practices. Avoid like a plague.

DESCRIPTION OF WORK
I had a check engine sign on my 2006 honda odyssey which i recently purchased. I went to a local Autozone, they checked out the code for free and said it was transmission related and suggested I go to the Aamco in Clifton, NJ as it was close by and they probably do a check engine light diagnostic for free. I went as advised being aware of Aamco's famous name and trusting it. When I entered the shop, I encountered an elderly and not so customer friendly lady at the desk. I immediately felt like I was in the wrong place. The lady started processing my vehicle info. which felt more like an interrogation. Anyway, now that I was in the shop, I had to go along with the show. I told her I just wanted a diagnostic just to know what the code is. I was advised that it was going to be about $35 for the diagnostic and it will take about an hour. Please note, they say it's only $35 just for diagnostic but if I agree to have work done then that $35 is included in the final price. During the initial processing, the main boss comes out (Mr. Don Saffioti) and asks some general questions about the car such as if I had any work done on it recently, to which i reply just an oil change the day before, and after this the CEL came on. After my response, he had a "yea yea I know" expression on his face. He also asked if I had any warranties on the vehicle, to which i replied "no" although I did have a 3 month limited warranty from a third party. The reason i said "no" was because I already knew that I was just another victim of theirs as they were going to tell me the worst and try to sell me a transmission. I didn't want to give them any more reason to get on with the show, as my main intent of going in their shop was just to get the diagnostic. I made that clear in the beginning. So after about hour and 30 mins. of waiting. Mr. Saffiotti tells me exactly what i knew he was going to say which was, "your transmission is bad and you need to repair it". He tells me to go in his office and gives me an estimate. I ask him what the code was, to which he seemed annoyed by me asking this and after repeatedly asking this question he reveals it to me and asks "how's knowing the code going to help me"? Anyway I tell him I don't have that kind of money right now, but he kept trying to sell me his service. He made a phone call to find out prices of some parts all the while trying to corner me on excepting his offer. I was now losing my patience as you can imagine and felt this guy was wasting my time. Being literally cornered in his little office and me constantly saying I don't have the money at this time, something the guy didn't seem to comprehend, I mention my warranty. This gets him upset as to why I didn't mention it beforehand so he didn't have to "waste his time" making phone calls. I don't know if he knew but the feeling was mutual. I reminded him as I was just in for a diagnostic that's all. Imagine if I told him I had a warranty in the beginning lol, he definateley would've thought he had me in the bag. I walk out of the office saying I could always come back if I wanted to right, to which he didn't seem too willing to see me in the future (mutual feeling lol). I mean this guy wanted to get everything his way without question, like a car salesman, but this was 10 times worse as car salesman at least show some courtesy. I went in an auto SHOP btw, not an auto DEALER! I guess the "AA-mco" name got to Mr. Saffioti's head pretty good. To top it all off, I get out of his office and try to pay the $35 dollars for the diagnostics but the lady nastily tells me they don't have change for a hundred dollar bill. I had to pay with my credit card. How could a place that makes thousands off of its unsuspecting victims everyday not have change for $100??? Please note, my vehicle still has the engine sign showing and runs fine (far and near) without having any type of transmission service done more than three months after this event. So much for "your transmission is bad and you need to repair it" (now or never) lol. In conclusion, I did not have a pleasant experience at the Clifton, NJ Aamco. Good luck to all who go there.

Stopped late on a weekday afternoon because was having trouble after receiving oil change tech noticed fluid leaking from my rear. Tech called over to shop and Jamie said bring right over, it was closing time and he stayed extra to look over my truck, made arrangements to come back next morning. after an hour or so they told me what they think problem was and gave me the option to leave it or take...

I dealt with a man named Jamie. He wanted to do work that was not necessary. He wanted an upfront deposited for parts. He was very pushy and did not listen to anything I complained about. He misdiagnosed the problem and I refused to let him touch the car. I have worked in the auto industry for a while, so I knew what look for with a service provider.

DESCRIPTION OF WORK
I came to them originally to get my transmission worked on, but decided against it.

Called and arranged to have them diagnose a check engine light. They did so quickly (yeah) and gave me a reasonable quote to repair, however then the fun began. When I arrived to pick up the vehicle, they suggested that part of my problem was transmission related and that I would do irrepairable harm to the transmission if I drove the vehicle further. Suggested a $2000 repair would quickly turn in...

DESCRIPTION OF WORK
Provided diagnosis on check engine light and provided quote to repair. However, took the opportunity to suggest my problems were transmission related and tried to pressure me into $2000 transmission repair.