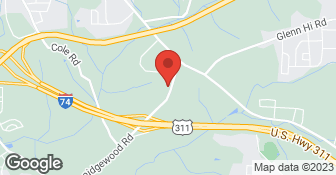 Three generations of the Lassiter family have been instrumental in the growth of City Transfer and Storage since its beginnings in 1908. Our grandfather, I.M. Lassiter, started City Transfer and Storage that year with a team of mules and horses, a wagon, and his vision for a company that could haul just about anything – as long as it fit in the wagon. We are the Carolinas’ largest, most diversified moving and storage company, and we’re also the oldest continually operated family-owned transportation and logistics company in the state of NC. Additional email - mspencer@ctsmoves.com. Additional DBA - Atlas Van Lines....

ALL PRO Packing and Moving is conveniently located in Central North Carolina. Operating from our headquarters in Winston Salem, we have easy access to locations all across the state. We have more than 20 years of experience in the packing and moving industry. We are also fully licensed, bonded and insured. We’ll put all of our skills and credentials to work for you.

We have 8 years of quality work experience that shows with every move. Our employees are always friendly and excited to give you the best customer experience possible while treating your home as it where our own. We will make sure you have a hassle and stress free moving experience with unbeatable prices, Call us today for a free quote!

The packers were efficient and friendly. The packing only took one day. The men came to crate a large mirror and a granite dresser top. They worked on the porch and they asked me to sign the invoice when they completed the job. The movers packed the crates on the truck and moved them as planned. When we arrived at the new house we had another moving company bring our things from the storage unit. ...

DESCRIPTION OF WORK
Needed to pack our home and move it to TN to a storage unit. They recommended we have a couple of things crated. This was done through a 3rd party.

DESCRIPTION OF WORK
The men who moved my furniture did a very good job and were very careful; However, my dyson vacuum sweeper has been missing ever since the move happened and even though this company insisted that I bought their insurance, they did not replace the vacuum sweeper. Not only that but the girl they sent out to look at the items needed to be moved charged me for her service as well. This was a hidden fee that I did not know about until after the move. If I had known that her service was not free, I would have used a company who did this complimentary. This girl really socked it to me and she made a lot off this move. I would never trust her again. They also charged me for a truck that they didn't even use because after they brought it to my house the lift on it did not work properly so I was charged for 3 trucks instead of 2. Also, they sent an extra person who hardly lifted a hand, she was a girl and not a strong girl at that. The men did all the lifting and she just stood around. But, I still paid for her. They charged me mint for a wooden crate to store my very delicate, very expensive chandelier in. A little old man arrived with some light wood pieces, he took some card board off of my floor that was being used to protect the hardwood floors and some cardboard boxes that I had bought from U-Haul myself and then he put the sticks and cardboard together in a makeshift way and this is what he put my chandelier in, nothing professional and nothing well made and nothing that could stand a long trip. Then the man tried to stiff me for $450.!!! I was charged for moving boxes that I never used and I was NOT reimbursed for them as I was told by the woman I would be. I told her that I did not need the boxes. The boxes were used and I did not want them. I had new boxes that I bought myself! She stiffed me on the boxes too! I never used not one of their old boxes! My move was absolutely NEXT DOOR! The trip was LESS than 1/4 (less than a quarter of a mile) of a mile! EVEN THOUGH THE MEN WERE NICE I WILL NEVER USE THEIR SERVICES AGAIN. THEY ARE A TOTAL RIPOFF! Even the man in charge of the actual move told me that I had paid way too much for my move but because of the woman who came to my house to evaluate the cost of the move in the very beginning, I never got a penny back! In fact, she made the statement to me that "Oh, thy didn't consider MY FEE! CONSUMERS BE WARE! |

We have searched our records, and do not have this name as being a customer of ours. The descriptions of employees used by this reviewer do not match any of our workers. We believe she has City Transfer confused with some other company.
A

DESCRIPTION OF WORK
An efficient move and subsequent storage.

DESCRIPTION OF WORK
Came out and surveyed goods for moving estimate and thoroughly explained the moving process. Packed large items I could not, loaded goods on truck and moved to my new home in another state. Did an excellent job!

DESCRIPTION OF WORK
Came out to house to inventory furnishings; explained thoroughly how move would proceed. Movers arrived timely, worked quickly, handled my goods with care.