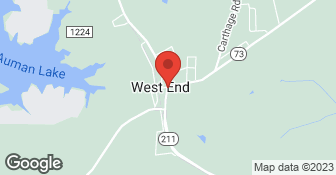 As we live in the house we have found things that he did not do properly. We’ve had plumbing issues. He did not lay the shower pan correctly and had an enormous problem with a leaking shower pan. We were without our master bathroom for about 4 months. The leakage caused some mold. That was the biggest thing. I would just say that he didn’t finish things particularly well. The plumbing would be the...

DESCRIPTION OF WORK
He built our home. He built it in 2006 and we started having some issues, or at least found out about the issues in 2009. This is the second time we’ve built the same house. The one in South Carolina was great and that builder spoiled us compared to this house.