Pool and Spa Service
Pool Sales Construction and Installation
Licensing
All statements concerning insurance, licenses, and bonds are informational only, and are self-reported. Since insurance, licenses and bonds can expire and can be cancelled, homeowners should always check such information for themselves. To find more licensing information for your state, visit our Find Licensing Requirements page.
Business Details 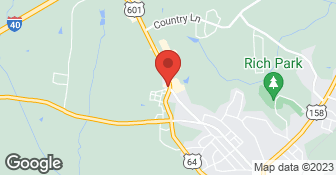 FREE 3D Design Consultation for Angie's List Members, Call Now! Anthony & Sylvan has been building swimming pools in North Carolina and South Carolina for more than 20 years and across the U.S. for more than 70 years. Because of this experience, we have the knowledge and know-how to build your dream pool. Whether you are looking to build a concrete pool or a fiberglass pool, our design consultants will help guide you through the many decisions that come along with building a pool – ensuring your new pool meets your needs and your lifestyle. In addition, we back every pool we build with the Anthony & Sylvan Lifetime Structural Warranty. Arrange for a free, no-obligation consultation and estimate today, and let Anthony & Sylvan turn your dreams into reality .

We continue to have problems, so honestly, the service was never completed. Mr. Kitchel probably believes he was done in May, 2013 which is not true. Contract price was $36,740 but unplanned add-ons totaling thousands d/t poor planning substantially increased the price as we progressed Ken Kitchel purchased the fiberglass pool we chose from Tallman Pools in Georgia, a great company who offers a qu...

DESCRIPTION OF WORK
Ken Kitchel of the Pool and Spa Store installed a 14' x 32' in ground pool .

As i have already stated above, this company does not do what it says it will and counts on the homeowner not to pursue him when he refuses to fix his shoddy work. I really can't afford to pay my attorney to take him to court. I also am not living in the house anymore although I do still own it. i am  a retired single woman on a fixed income. I guess he saw the perfect victim to take advantage of.

DESCRIPTION OF WORK
I ordered an above ground pool from the Pool and Spa Store in Mocksville, NC.  The Pool Store owner said he could put it where I wanted it with an extra cost of digging down to level it. He said he would put sand under the base and it would be fine. He did this after much prodding as he was always "too busy" or had to leave. I said I wanted a refund if the work couldn't be done within at least of month from when he said it would be done. It was finally completed. I paid extra money to have the ground leveled and tamped so the the pool would stay secure. I also had to buy rock to back fill  the upper end of the pool per the Pool Store owner's specifications. He said we had done an excellent job of securing the pool.  About a month later I noticed that the downhill side had sunk. The Pool Store Owner, Ken said he would close it for the winter and let the pool settle as much as it would over the winter and he would fix it in the spring. Spring came and he came out and slid cinder block type flat blocks under the pool. It not only didn't level the pool, it damaged the pool liner and caused the pool to leak. This took place in May of 2011. He has done NOTHING to rectify the situation. The pool cannot be used. It was under warranty at the time and he refused to come back and fix it. I have called him, gone by the store, sent a letter and an email. No response. I told him I was contacting my attorney and he didn't care.  What he has done is criminal. I thought I followed through like anyone should have in this situation. He just flatly refuses to fix it. There is no explanation why. I guess he feels he can just get away with it. I am now living in Costa Rica and my house in Mocksville has been on the market since May, 2011. The pool is a total loss. I'm out $4000 and have no recourse. The only thing I can do is write a report and hope others don't hire his company and get burned like I did. Of course since this has happened, others have told me they have had similar problems. I didn't hear about that until after the fact.

Unfortunately this review is false. Our company would never inform a homeowner to wait for the pool to "settle". Ken Kitchel has been in the industry over 25 years and treats all jobs as if its his own. It is very sad that individuals would create a false ad. This ad also states that Ken came back to slide wood under cinder blocks however that is impossible to do for any underground pool. Again ve...