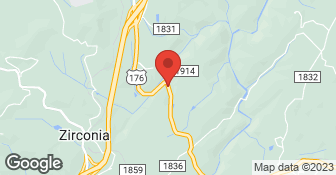 We Are A Top Rated, Family Owned Landscaping And Hardscaping Company Serving The Asheville, North Carolina Area... You Can Count On Us To Provide You With The Most Reliable, Knowledgeable, And Environmentally Conscious Service Available!

I called to have green river quarry deliver a load of dirt...fill dirt but dirt being the key word. It was a tandem axle dump carrying 15 tons....sounds like a lot but not all that much, especially when the load was dumped it turned out to be 99% rocks...and not small rocks either. I didn't notice this until after I had written the check or I would never have paid for it. I asked for dirt, the bil...

DESCRIPTION OF WORK
green river quarry delivered a 15 ton load of what was supposed to be fill DIRT..

DESCRIPTION OF WORK
They brought 6 truckloads of gravel and spread it on our 1/2 mile driveway. We had called two other companies previously and neither followed through. In the past we'd used another company who gave a reasonable estimate and then tried to almost double it at the end. He claimed he was 'losing money' on such a long driveway, etc. So, we were a little scared to deal with yet another company. The ones who didn't follow through were probably concerned about losing money, too. Who knows? Anyway, this time we went to the source of the gravel: the local quarry. They sent truckers they are familiar with and who did a good job.  If they didn't, they would probably be concerned the quarry would take them off the rotating delivery list. This gave us a sense of security that we wouldn't be 'ripped off.' I'd advise anyone who needs at least one dump truck of gravel to go to the source (the quarry) like we did. This company is great!