A Rated | 143 Reviews
Request a Quote 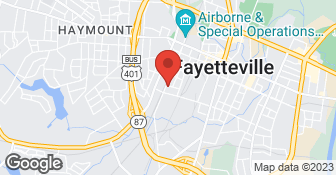 It is the mission of Haire Plumbing & Mechanical Co. to provide our customers with a quality job, using quality products in a time frame that meets their needs.Haire Plumbing Co. was founded in 1947 by H.R. Haire, Sr. During the 1950s and early 1960s Haire Plumbing Co.'s main focus was plumbing service, new residential construction projects, and small commercial projects....

When I placed the work order on Angies List, I was called within 30 to 35 minutes and this was around 0630 in the morning by 0700 I received a call asking what exactly was needed, Explained and was told the service team arrived at 0800 and they would be dispatched by 0830, they arrived early and once explained to the service person, he went to work on it, He was fast, polite and replaced water val...

DESCRIPTION OF WORK
Had to replace water valve located in wall behind toliet and replace inner workings of toliet.

The plumber, his name was Kevin, would not replace the valve seat gasket on two external faucets. He wanted to replace the entire faucet assembly. His claim was that they were too much trouble. After he left, I bought some gaskets at home depot and did the work myself. When dismounting the toilet (I wanted to paint behind the toilet) he found that the toilet flange was corroded and could not be re...

On time, friendly and professional. Did not try to have me buy anything I didn't want. Will certainly hire again.

Thank you for such a nice review, [Member Name Removed]! Your satisfaction is our goal. Thank you again!
A

Both times we had them come to perform work on our home they were punctual, friendly and make sure we were satisfied with the work performed. I would highly recommend this company.

Called yesterday at 3:00 to make an appointment. Was told that they would come between 8-12 on the following day. Cancelled all my appointments and no show and no call. Called them at 1204 and was told that they were just going to call me.. Sure you were! Everyone’s time is valuable . All it took was a simple call saying “hey, we are running behind” and maybe we could of worked something out.. unf...

DESCRIPTION OF WORK
Kitchen faucet replacement and toilet running through .. leak under sink in kitchen repair

General Information
Licensed
Yes
Bonded
No
Insured
Yes
Free Estimates
No
Eco-Friendly Accreditations
No
Payment Options
Check, Visa, MasterCard, Discover
Senior Discount
10%
Emergency Service
Yes
Warranties
Yes
All statements concerning insurance, licenses, and bonds are informational only, and are self-reported. Since insurance, licenses and bonds can expire and can be cancelled, homeowners should always check such information for themselves. To find more licensing information for your state, visit our Find Licensing Requirements page.