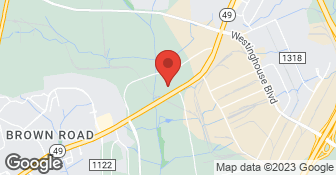 American Dry Cleaners has the distinction of being Charlotte's oldest operating dry cleaners. It dates back to November 1921 and was called American Dry Cleaning Co. It was originally located at 1406 South Tryon Street and by 1926 had opened a branch location at 323 E. Trade Street. Its original slogan was "Particular Work for Particular People." Later in 1927, the business was consolidated and moved to East Morehead Street. In 1982, another branch store was opened at 1806 North Graham Street and was known as American Dry Cleaners. Finally in January 1984, this became the main and only location when the Morehead store had to be moved in order to make way for the new I-277 and South Blvd. interchange. This dry cleaner has seen many changes over the years including 5 different owners, starting with H.E Deal, H.E. Deal Jr., David Allen, Kenneth Hill and currently Larry Hill. One thing that has never changed is the commitment to providing expert dry cleaning and pressing with attention to detail to it's many customers, some of which are 2nd and 3rd generation. Many of them look forward to the weekly uplifting sayings in our Charlotte Observer ad. Our Customer Service Representatives know many of our customers by name and have provided superior service by being knowledgeable, prompt and friendly, continuing a long standing tradition.

Their staff is very friendly.

DESCRIPTION OF WORK
They press and launder my shirts.

Everything goes well for the most part each time.  However, in an occasional batch of shirts (20+) there seems to be a shirt or two that gets pressed with an unfortunate new crease created where one does not belong (like in the middle of a shirt pocket.  I primarily use this service as I don't have time to iron shirts.  Other than that, I consider Cave Dwellers excellent with great management and ...

DESCRIPTION OF WORK
I regularly use Cave Dwellers for shirt cleaning and pressing.

DESCRIPTION OF WORK
drycleaning of 7 dress shirts and a jacket

They are very fast. They are friendly. The quality seems to be very good. I have never had any problems with them. Their prices are very reasonable. They ask questions on whether we want anything to be done in particular.

DESCRIPTION OF WORK
I use Cave Dwellers Cleaners for dry cleaning services.