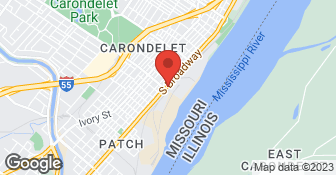 With over 40 years of foundation repair experience and a Super Service Award winner for the last 7 YEARS in a row, Spartan Ram Jack leads the industry in the midwest. We have offices in the Kansas City, St. Louis, Wichita, and Columbia areas and are recognized for professional, honest, and thorough repairs. We have years of experience solving the foundation problems unique to the Midwestern climate. Our quality workmanship has earned us a reputation as one of the area’s most reliable & honest contractors. We specialize in foundation repair, basement waterproofing, mud-jacking, drainage improvements, bowing walls and differential settlement in both commercial and residential buildings. Our projects are completed on time and within budget. You can depend on Spartan Ram Jack every time.

Finder Bricklaying has been in business for over fifty years and over three generations. Joseph Finder Jr. Has over thirty years of experience in the business. If it involves brick, block, or concrete, he can get it done. He has an amazing eye for detail and will make sure the job is done exactly how it should be. Quality brick and block work at a fair price is our business. Retaining walls, tuckpointing, patios, chimneys, fireplaces, or any other brick and block work will be done well and in a timely manner. With our decades of experience, you will have a hard time finding our quality of work at our prices. Get a bid from Finder Bricklaying and get another thing crossed off that honey-do list.

We contracted this company to install a basement waterproofing system which included a French drain tile system, sump pump, and battery backup sump pump. We had good recommendations of this company from a couple of my co-workers that had basement work done on their houses. We initially got a work completetion timeframe of three days. From the get go we had problems with this company not showing up...

Do not hire Solutions Foundation and Waterproofing under any circumstance. We initially hired Solutions Foundation and Waterproofing (SF&W) to install a drain tile system in our basement. They had a good rating with the BBB, and a reference checked out. Unfortunately, the scope of the project quickly increased, and along with that so did our problems with the company. The short story is that they ...

It was awful.  The owner was very rude and disrespectful to me.  The workers were nice, polite, and friendly but the quality of the work just wasn't up to par.  They ground down too far on the foundation so I am going to have to have more work done.  They left a huge mess in my basement.  There was one good thing that happened:  They told me the dust was going to be at a minimum.  I had just clean...

DESCRIPTION OF WORK
Our basement was leaking so we hired a structural engineer who recommended some companies to fix it.  I checked out the reports for those companies on Angie’s List and Solutions didn't have a good grade but I decided to get an estimate from them anyway.  They gave me estimates that were about the same.  The owners were both nice and professional.  I told Solutions that the other company’s bid was cheaper so I was going with them but then he offered to give me $4000 off.  I jumped at the chance to save money even though they have some not-so-great grades on Angie’s List.

I had a bad experience with them. I had signed the contract without understanding the fine print. He had not given me time to renege on it and I was charged a lot to have two holes dug by two people. I had to pay that money as he had already started work by then. It was for pier work and the money did not get reimbursed. He also did not reimburse me for the concrete, and said that too was included...

DESCRIPTION OF WORK
I had used Solutions Foundation Repair & Waterproofing for pier work.

Asked us to underpin pier a portion of her garage. we submitted a proposal for 4 piers for 3,800.00. When the excavation was complete we discovered the structure didn't have a proper footing to install the piers...(NO FOOTING = SETTLEMENT) It is clearly stated in the contract that if the structure has improper footings, Solutions will have to create footings. If the customer doesn't wish to contin...
F

He tore up the sidewalk and patio. When he repaired the holes for the foundation, he made a complete mess. Many of the foundation holes keep sinking. He tried to repair them, but they kept sinking. I am not happy with the service he delivered.

Solutions was hired to pier the outer foundation walls from the exterior of the structure the patio and side walks were removed in order to install the foundation piers. This is CLEARLY STATED in the contract that Solutions is not responsible for outside concrete, plantings, landscaping, appliances etc. We are a structural repair contractor not landscapers or HVAC the concrete was replaced @ an ad...