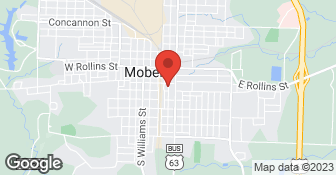 Should have did more checking around and could have found a better price. compared the price (after fact) and found they over charged us an easy 175% of what others would have charged really didn't care that they would should up over an hour before the scheduled time but guess that's a tad better then being late. the first time they just called and left a message they were on the way and we weren'...

DESCRIPTION OF WORK
put in a generator and surge protector

They were great. An appointment was set over the phone and the serviceman showed up on time. We live in an old house so it took some time to trace the problem, but it was fixed efficiently and within their cost estimate.

DESCRIPTION OF WORK
They troubleshot a defective outlet and rewired it into a new circuit breaker.

They are out of business. The experience was very good at the time, but then we found out they didn't separate it very well and there is too much in the lines. Other than that they were good. They put everything in well, except that we found out they had too many outlets for a line so sometimes it kicks off the electricity. If they put in a 30 amp it would have been different. 3 rooms are all on o...

General Information
Bonded
No
Insured
Yes
Free Estimates
Ask for Details
Payment Options
Check, Financing Available
Senior Discount
No
Emergency Service
Yes
Warranties
Satisfaction
All statements concerning insurance, licenses, and bonds are informational only, and are self-reported. Since insurance, licenses and bonds can expire and can be cancelled, homeowners should always check such information for themselves. To find more licensing information for your state, visit our Find Licensing Requirements page.

A
18 REVIEWS
Electric by Miller, Inc.