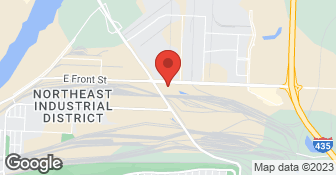 Dry Basement Foundation Repair has served Kansas City and the area since 1975 in Basement Waterproofing, Foundation Repair, Sump Pump installation and Basement Finishing and Remodeling. We've got 50 employees and do not use subcontractors. All costs are determined on a job by job basis. No travel charges. We also do business as Basement Magic ....

Founded in 2011, AdvantaClean of Kansas City has become a leader in the local market in the areas of water damage mitigation, mold remediation, fire/smoke damage restoration, and air duct cleaning. Owner Kevin Full has spent almost 20 years in the local community and enjoys bringing a focus on an improved customer experience to this industry.

Earning a #1 rating on “Angies List” is quite an honor, it came from hard work, knowledge, and a core of talented craftsmen. At McGhee Concrete, we’ve earned our reputation for our level of professionalism, quality services and our skilled, innovative concrete contractors. We go beyond traditional concrete driveways and pathways, adding only the most elegant décor to the structure they surround. This all has been attributed to quality. You can be assured that a company with journeyman carpenters, and journeymen concrete finishers we will complete your project beyond your expectations.

Had an appointment today to get foundation done, (8/21/18) didn't get a call till 3:30 letting me know that they won't be able to come till tomorrow. Not appreciated when I had to take off of work for this to be done! Now the next day and they were to be here between 8-9 didn't show up till about 10. I was told it was a one day project however they left at 3:45, and I will have to take another day...

Job was great. Very professional, on time getting there and finishing job. Clean everything up and would hire again.

DESCRIPTION OF WORK
Repaired a 2 holes in foundation that wood burning stove pipes ran through. Patch some minor cracks in one wall. Also removed foundation of the old chimney.

About one week after the inspection the company returned and fixed everything. It now looks a lot more like what we had been promised and were expecting. They even replaced the hammer they broke as promised. I would hire Dry Basement again. They owned their mistakes and corrected them. They really did put the customer first. Thanks guys.

DESCRIPTION OF WORK
I reviewed this company when the work was completed and I had indicated that I would not hire them again or recommend them. I called them back two days after completion with complaints on the installation of the water proofing they installed along with the sump pump and drainage system. About a week later they called back and made an appointment to come out and inspect our concerns. A supervisor (can't recall his name) and a crew supervisor arrived at the scheduled time. They listened, inspected, took photos and determined that we had legitimate complaints. He said that all issues would be resolved as soon as possible.

The estimate process went great, we've really been impressed with the sales folks they send out. He was very flexible about timing, and spent quite a bit of time preparing the documents. We ultimately did not hire Drybasement to remodel the basement because the estimate was considerably more (to the tune of about $52K), including creating an egress window somewhere along the foundation - an expens...

DESCRIPTION OF WORK
We've had Drybasement out on a couple of jobs, once to install retaining piers along the north and south walls in the basement, and a different time to install draining lines along the entire perimeter of the foundation. So when we were ready to consider remodeling the basement, we asked Drybasement for an estimate. We aimed for middle of the road on material estimates. The work would entail creating an "L" shape in the basement along the long side, redoing the bathroom that we tore out during the foundation repair work, and doing a bit of work to remodel the stairs down into the basement. It probably covered between 3/5 - 2/3 of the basement space that would be remodeled.

Great. He took the time to explain everything and answer all of my questions. It was a small price to pay in order to have peace of mind regarding the soundness of my home. I now know what issues there are for me to address.