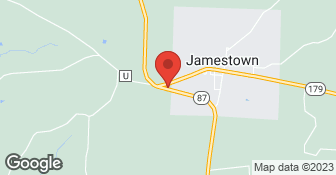 The staff that came and removed our exisitng fireplaces were on time and punctual. The entire crew were courteous and paid great attention to detail. Ordering our new fireplace did not go as smoothly, after two trips to the shop to pick out the new model we decided on what we wanted. The unit was supposed to be ordered so we scheduled, plumbers, electricians and cabinet makers alll around the date...

It is a complicated repair and they have to do it in several parts. We are still waiting on the weather to cooperate. They need to waterproof the chimney. The $100 is for the chimney sweep service. They have been busy and what stands out is that it took a long time to get service but they do a good job when they do come. They have been kind of swamped this past year.

DESCRIPTION OF WORK
They did some repairs to the chimney. They have done chimney cleaning too.

DESCRIPTION OF WORK
Sweep chimney and did a safety inspection of chimney.

The owner of the company came, inspected, told us we did not need any repairs, and charged only half of what we were quoted. He fairly did not make the whole charge because he was here a short time and did not have to climb up on the roof to further inspect. We did not ask for a price reduction; it was offered. I hired this company based on Angies List favorable reviews.

DESCRIPTION OF WORK
After a chimney fire, we hired Advanced Chimney Techniques to do a thorough inspection to determine if cleaning was needed before we tried to use the fireplace again.

We asked for a quote and we were given what we considered a reasonable estimate and since it didn't take as long as estimated, the bill was changed to reflect this, so we were charged less than the estimate. The workmen were very professional, tidy and explained how to use the controls on the log inset. We couldn't ask for a better experience and highly recommend them.

DESCRIPTION OF WORK
We originally hired them to sweep our chimney in October for our newly purchased home. They checked the chimney and found there was no soot , so they only charged a very nominal service fee. (The previous owner said that they hardly used the fireplace.) We had a wood burning fireplace with a gas starter, so gas was already available to the fireplace. We wanted to covert the fireplace to gas logs. The service was for the conversion from wood to gas. (This price DID NOT include the cost of the gas burner/log insert, ONLY to remove the gas starter and install the log set.) We also knew that the building requirements had changed since the house was built and we should have an attic insulation shield around the metal chimney in the attic. Their contract was to install this as well.

General Information
Bonded
No
Insured
Yes
Free Estimates
Ask for details
Payment Options
Check, Visa, MasterCard
Senior Discount
No
Emergency Service
No
Warranties
Ask for details
All statements concerning insurance, licenses, and bonds are informational only, and are self-reported. Since insurance, licenses and bonds can expire and can be cancelled, homeowners should always check such information for themselves. To find more licensing information for your state, visit our Find Licensing Requirements page.