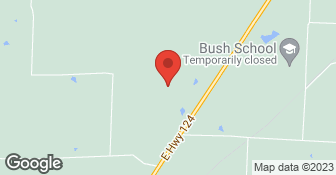 Seemed to start well but he never finished the project - ultimately we overpaid for incomplete work.

DESCRIPTION OF WORK
Mr. Burnett was hired to install some wiring into our unfinished basement.  He was referred to us by another contractor we worked with for another home service.  Mr. Burnett came and gave my wife an estimate .  He came and installed wiring in our basement as a roughed in job.  The outlets were placed, the lighting boxes were installed and wires were run throughout our basement as requested.  Mr. Burnett explained that he had done as much 'rough in' work as could be done before other steps were taken toward finishing the basement.  We had to frame some other interior walls before additional wiring could be done.  The work he had performed seemed to be pretty good - in terms of the wiring that appeared to be installed.  But ultimately this was a half completed project.  We finished the other steps that were necessary and my wife attempted to contact Mr. Burnett multiple times to finish the work.  Often we could not reach him for service; on two occasions when we did contact him he said he would come but never showed up.  I believe that he overcharged us (nearly the same cost as a complete project estimate from an other company) for the work he performed and he was ultimately deceptive as he never came to complete his work.  We are attempting to work with another contractor to finish the work.  Unfortunately we failed to check with Angie's List prior to working with this company.   We will not make this mistake again.