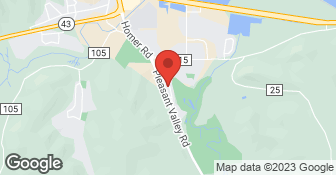 I am a home repair & services specialist. My usual answer to your repair problem will be, "I can fix that" or "I can do that" or "I can build that." I usually work alone, but have manpower available if we need it....

Welcome to Renew Crew of Southeast Minnesota. If you need gutter, siding, patio or deck cleaning in the greater Southeast Minnesota area, give us a call. Our environmentally friendly 3-step process combines pressure washing and sealing to leave your outdoor surface not only deep down clean, but protected. Give us a call and get your free estimate.

We are a team of well-educated professionals with a company culture of mutual respect and trust. We deliver quality projects on time and within budget because we have genuinely care and concern for our customers. About the owners: Levi Bechtum has been in the construction industry for the past 12 years. His primary focus has been in remodel construction, excavation and plumbing. Born and raised in La Crosse, Levi attended and graduated from the University of Wisconsin La Crosse where he majored in Accounting and Finance. Levi lives in La Crosse with his wife and two kids. During his free time, Levi enjoys taking his family camping, buying reduced and damaged produce at the grocery store, creating small batches of charcuterie with his grandma’s recipes and organizing messy spaces—specifically tools. Josh Hutson grew up in rural Washington State. His family operated a sustainable organic hobby farm in addition to logging and excavating. Hard work and family values weren’t talked about as much as they were lived. In 2004, Josh left high school to enlisted in the United States Marine Corps where he deployed twice to Iraq. He was later awarded a scholarship to attend Norwich University in Vermont and was commissioned as a Second Lieutenant upon graduating with a degree in History and Creative Writing. He has held roles at the US State Department and most recently was the Director of Business Development at a regional construction firm. Josh is committed to excellence. He enjoys providing long lasting solutions to complex problems, and is ultimately driven by wanting to help and serve. Josh lives in La Crosse with his wife and three children. He enjoys playing in the park near his house, eating ice cream and shooting things from very long distances.

Have you hired Ed's Repairs & Remodeling? Be the first to share your experience and help other people looking to hire this Pro.

Almost any home repair or remodeling project, indoor or out.