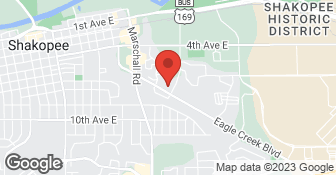 We are bat removal specialists. We have been serving Southeast MN and West Central WI for over 20 years. Our process of exclusion uses one-way exit devices that allow bats to get out but not get back in. We are owner operated. We guarantee results.

We provide residents of the St Paul, Minneapolis, and surrounding suburbs with a complete range of pest-control and extermination services. Two time Super Service Award winner and awarded the BBB Accreditation certificate since 2012. Our professionals are highly experienced and dedicated to offering quality, affordable services. We are extensively trained and experienced in the effective and safe removal of a wide range of household and commercial pests.

Xtreme Pest Solutions offers the highest quality of service at the most affordable rate. Guaranteed!!! All of our technicians have years of experience and will have a solution to your pest issue. Our technicians are willing to go that extra mile and take the extra time to make sure our customers our happy. Customer Satisfaction is guaranteed!!!

Latest call to the firm has not had a reply. We have not seen him come back to work on the yard. Our problem is worse than before.

DESCRIPTION OF WORK
We have hired this firm at least twice to exterminate moles in our yard. The moles remain in the yard, actually worse than before.

They made an appointment with my caretaker and didn't show up. Now they're not returning phone calls. They didn't call to say they weren't going to make the appointment.

DESCRIPTION OF WORK
They were supposed to come for general extermination.

The charge was supposed to include service until the mouse problem was resolved. It was around Thanksgiving 2005, not a single one of his traps caught anything, where as our own traps were catching mice. We called several times and he would never return phone calls. We got back from Christmas vacation and he still had not returned calls. Finally, we did get a hold of him and we set up meetings on ...

DESCRIPTION OF WORK
Hired him to get rid of mouse problem.

JEFF WAS WILLING TO STOP BY AFTER MY WORK, WHICH WAS VERY CONVENIENT. SINCE THE TREATMENT, I HAVEN'T SEEN SPIDERS OR MICE.

DESCRIPTION OF WORK
SPRAY FOR SPIDERS; BAIT FOR MICE. MY HOUSE IS A 1961 RAMBLER WITH FULL BASEMENT AND ATTIC.

I CALLED AROUND TO COMPARE PRICES. THEY WERE THE ONLY ONES TO ANSWER THEIR PHONE. THEY QUOTED ME THE BEST PRICE(BY FAR), OFFERING TO BEAT ANYONE'S PRICE BY 10%. THEY SHOWED UP RIGHT ON TIME, WERE POLITE, COURTEOUS AND THOROUGH, AND THEY OFFERED TO COME BACK FOR FREE IF WE HAD A RECURRING PROBLEM, WHICH OF COURSE WE HAVEN'T!

DESCRIPTION OF WORK
THEY SPRAYED THE OUTSIDE OF OUR HOUSE FOR AN ANT PROBLEM WE HAD. IT WORKED!