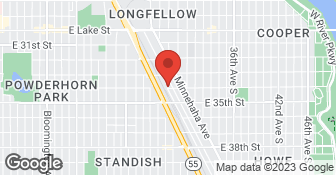 We are a local, family owned and operated business. We have have serving the Minneapolis community for over 30 years. We strive to offer our customers with the best possible customer service. We specialize in residential and light commercial sewer and water service line repairs, replacement and new construction. Some other services we offer but are not limited to: sewer cleaning, sewer video inspections with or without locates/tracing and live or recorded videos. Storm Sewer, Man Hole, Stop Box, Dry Well tank repair, replacement and new construction. You have questions we've got answers, Call Us Today for your Free Estimate!...

Everything this company did was excellent, I couldn't ask for anything better with their work after seeing a previous job they did down the street. Their communication was excellent and kept up us to date with the progress. I would highly recommend this company.

DESCRIPTION OF WORK
They put the water line in and decided the sewer line didn't need to be replaced, they also but in the new valves whilst they were there. They repaired the drain in the basement and managed to replace that as well. They also set some pest control devices in the basement.

My sewer had backed up into my basement and the cause appeared to be a collapsed liner. Hired Mark to replace it and was quoted $3,300. They did the work in August 2013. They had to dig through a corner section of my cement driveway and I was told they would pour new cement and it would be as it was. They replaced the liner and poured new cement in the corner. I noticed the new cement was white wi...

DESCRIPTION OF WORK
What a great business. I thought I needed to get some extensive work done that would have cost me over $5000.00. Cichy's came up with a better solution that significantly reduced costs...of course still meeting code.  Seems like a really honest, helpful business.

I was NEVER able to firm up an appointment with Cinchy.  They would promise to call me back and never did.  I called again and was given some song and dance about they would get back to me.  I was getting pretty disgusted at their utter lack of organization, although they have a good reputation for their work, if you can ever get them to come and do the work!  Meanwhile, the city cancelled the shu...

DESCRIPTION OF WORK
I called Cinchy back in April, 2014 because the pipes around my meter were rusted and the city wanted to replace the meter but would not until those pipes were replaced.  They came out within a day or two and I got a very reasonable price quote.  Then on July 1, 2014, I got a shut off notice from the city and called Cinchy to schedule the repair.

They were great.  They came out  the morning I called when all others were 3 days out.  The billing was fair and they were able to thaw the line.