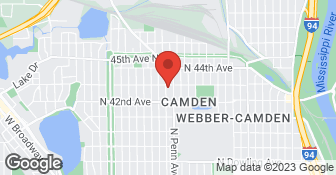 We are dedicated to serve our community in minneapolis since 2006, Our quality painting services are superior to other providers because we use high quality paint, also we prepare all surfaces before we paint so the paint will adhere and last longer, Our customer satisfaction is in our best interest, you will be satisfied always. call us for an estimate. We normally provide all supply materials in our jobs, Client can have a selection of their own paint or use our recommendations of a high quality paint. You can contact me at 612-978-1919

I'm a painting contractor with over 25 years experience so I've encountered almost every painting/drywall finishing situation. I perform all the work myself so you'll only get the best quality. All bids are free. Contact by email is ok.

Welcome to BLUE Painting. We provide custom interior and exterior painting services for homeowners in The twin cities and their surrounding suburbs. Our focus is in providing a simple start to finish process that ultimately leads to a high quality finished paint job. We'll start by meeting you in your home or business to establish which areas, processes and materials will produce the best result for you paint job. We provide color samples, test patches, and professional color consultations upon request. We'll leave you with a guaranteed price in writing for your completed paint job. A beautiful paint job and a pleasant experience awaits when you pick up the phone and call BLUE Painting.

We were very disappointed with their service and would not hire them again or recommend them for the following reasons. The initial estimated time to complete our project was 4 days, but it took almost 3 weeks. They did not devote 100% of their time to this project but rather worked when it was convenient for their schedule. Some of the skim coating had to be redone because they did not bring in a...

DESCRIPTION OF WORK
In our 1000 square foot one-level town home, we hired them to remove the kitchen/dining wallpaper and skim coat the walls, paint all walls, paint all textured ceilings, and scrape/respray the bathroom ceiling.

On the day A&J scheduled the work to begin, they did not show up.  I finally called around 1030 AM and the owner, Jim, laughed and said he had forgot about me and they would be out the next day.  Either they didn't put us on the calendar as described or they didn't look at their calendar on Monday of a new work week.  Jim commented that it was only a three day project and they would get it done wi...

DESCRIPTION OF WORK
We  were remodeling our kitchen and as part of that project the old soffits were to be removed and the walls and ceilings behind the soffits were to be repaired and blended back into the existing ceilings and wall.  Once completed the kitchen ceiling and adjoining Family room ceiling were going to be scrapped and re-textured. We received a quote from A&J Painting to complete the sheet rock work, scrap the old texture from the ceiling, prep and patch as necessary, re-texture and paint the ceilings of our newly remodeled kitchen and and family room for $1175.  We accepted their bid.  Theirs was the only bid we requested because A&J had done some painting for us a couple years before and we were satisfied with their work and the quoted price for this project. After we had accepted the quote, I called Jim at A&J Painting and told him that I also had an unfinished project in a stairwell leading from the main floor down to our basement recreational room.  The old stairwell had been enclosed, sheet rocked and taped, but the final joint compound still needed installed and sanded on the ceiling of the stairwell and one adjacent wall.  No painting would be necessary, just finish the joint compound work so I wouldn't have to deal with the rest of the dusty mess.  He said that without seeing the area he would have to quote it out at $33 an hour plus materials.  I new there wasn't too much work there to be done and the joint compound material would be minimal so I said that would be fine. I told Jim that it would be 3-4 weeks before I was completed with the rest of the work and was ready for them to begin work on the ceiling and he said that was fine, to just let them know at least a week ahead of time. I later got to a point were I could predict when I would need them to start work and I called A&J Painting and again spoke with Jim.  We scheduled Monday, March 7th as the day they would begin work.  This was a full two weeks before the March 7th date.

QUALITY WAS AN A-. THEY DID A GOOD JOB EXCEPT THEY DID NOT SCRAPE OUR WINDOWS AFTERWARDS. WE HAD TO ASK THEM TO DO THAT. WE NOTICED A BROKEN WINDOW AFTER THE JOB WAS COMPLETED. WE CALLED THEM AND THEY SAID THEY WANTED TO SPLIT THE COST OF THE REPAIR AND THEY BROKE IT. WE DIDNT AGREE AND THEY PAID FOR THE ENTIRE REPAIR. THE OWNER OF THE COMPANY SAID HE WOULD BE ONE OF THE PAINTERS BUT HE ONLY VISIT...

DESCRIPTION OF WORK
THEY PAINTED OUR EXTERIOR TRIM. THEY ALSO PAINTED SOME STUCCO AND THE WOOD SIDING ON OUR GARAGE