Snow Removal
Deck Maintenance
Stone and Gravel
Hauling
Firewood
Fencing
Concrete Driveways
Decks and Porches
Concrete Pouring and Repair
Licensing
Bonded
Insured
All statements concerning insurance, licenses, and bonds are informational only, and are self-reported. Since insurance, licenses and bonds can expire and can be cancelled, homeowners should always check such information for themselves. To find more licensing information for your state, visit our Find Licensing Requirements page.
Business Details 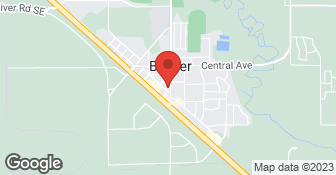 We are a professional company that will not let you down on any of your landscaping needs. At Nicks Tree and Landscape We have only the best well trained staff to get the job done the correct way. One call can do it all. check out our website at www.Nickstree.com for more info....

Here at Kelli's Outdoor Care we are happy to bring you over 15 years of experience in, Tree trimming and removal. We are a small family owned business., Dedicated to helpping you develop a healthy, safe, and beautiful outdoor environment. for you and your famliy.

Nick came and gave me an estimate on a Tuesday and took the trees down the next day. This was part 1 of 2. He will be installing a fence, removing a concrete patio area and fixing the really ugly flower beds. He has been very helpful through this whole process. Because of his prompt service I have hired him to do some tree work at my rental property.

I called 5 tree services. Nick's Tree & Landscape was one of two that called me back. He was the only one to show up for the estimate appointment and he was on time. He game me a printed estimate which I promptly accepted and his crew arrived the next morning and removed the trees. They did so without incident and cleaned up afterwards. I was very happy with the job he did as well as felt his pric...

He removed the driveway but the draintile was installed incorrectly and backed up all around the foundation of the house when I put a hose in it.  After I asked him correct this matter he basically took his toys and went home and never completed grading the front yard. He refused to acknowledge the draintile was installed incorrectly and I had to dig the whole thing up myself to give the system th...

DESCRIPTION OF WORK
As a contractor, this guy is the least professional person I have ever encountered. We hired Nick to remove an old driveway, regrade the yard and install a draintile system.

This report is false the work was done the correct way the homeowner thought it should be done another way although I explained to him that it is in the correct way already but he insisted that I tare it up and put in none slotted drain tile so I did at his request evin though the drain tile system worked fine the way it was after I replaced it with the none slotted tube it did not work as for I e...
A

Accommodated me by coming during a busy time for them. Excellent service and professional workers.

DESCRIPTION OF WORK
We had a 100 year old white oak tree about 70' tall that was leaning precariously over our garage. The difficulty was compounded by the oak tree having several major branches overhanging power lines as having an extensive ground cover garden planted around the base of it. Nick's crew showed up on time and worked with precision of a drill team both up in the tree as well as on the ground. The tree came down in calculated sections without touching the power lines or damaging the garden. As promised, the clean up crew went right to work with blowers and rakes and the remaining stump was ground out and the ensuing mess vacuumed up. I would not hesitate to recommend them to anyone. Mike Zigler big lake, mn.

At Nicks Tree and Landscape we are experts in paver patios and walkways, block walls, Landscape design and installation, Tree trimming and removal, We are prepared to take on most any job that is in relation with the outside of your home or business.