A Rated | 11 Reviews
Request a Quote 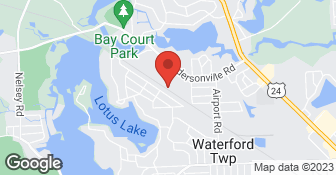 Excavating business for 40 years. Specializing in residential sewer, water and septic. All estimates are free of charge. We accept check, master card, visa....

Although scheduling was difficult, Aaron came highly recommended and did a great job. We had a huge project to replace sewage pipes from our house to the street- about 40 feet, while keeping landscaping and brick walls intact. He did a great job! And was very friendly and helpful.

DESCRIPTION OF WORK
Sewage piping replaced from house to street

It was excellent. They were very professional and got it done the same day. They went above and beyond and made sure to not harm a tree that I liked on my property that was sitting on the edge of the septic tank. I was very satisfied. I was totally happy.

DESCRIPTION OF WORK
They crushed my septic tank and connected me to city sewer.

Everything went great. We had no working sewer lines which was an obvious problem. One of the larger companies wanted over 15K for the same pipe bursting work. Another quoted 12K to excavate. We just didn't want to deal with digging up the landscaping. In fact, the quote we signed was 8,800 but when Aaron saw we had sand, not clay, credited us $400. Who does that? I cannot understand the F reviews...

DESCRIPTION OF WORK
Aaron & his crew replaced our sewer pipes from the house to the city. He used "pipe bursting" through our old 1924 Orange Burg and partial pvc which meant we could avoid excavation/ replacing the landscape. He and his crew were very professional, very polite, very efficient and cleaned up.

Don't bother - you won't get a call back! When I first called, the woman who answered was pleasant, I emailed the county permit, and she said Aaron would be in touch with me the following day. I never received a call so I called the office again at the end of the following day and spoke to the same woman. She said it would be probably take about a week to get a quote and Aaron would be in contact....

DESCRIPTION OF WORK
I was seeking a quote for a septic drain field replacement.

DESCRIPTION OF WORK
The main water line between the city vale and my house was cracked (probably for some time) and water was running down the street. I noticed this problem on Monday called the city to confirm the problem. They gave me a list of approved contractors for the city of Rochester Hills. I called 4 companies. 3 came out the next day on Tuesday. We were leaving for vacation on Thursday. Because of the July 4th holiday 2 companies (whose quotes were the highest) could not get the job done for a week or so. Aaron called Miss Dig and pulled city permits Tuesday afternoon. They were on the job the following morning and finished the job the same day without any damage to my landscaping. They did great work and very professional. They did me a big favor getting the job done in less than 24 hours from initial contact.

General Information
Licensed
NA
Bonded
Yes
Insured
Yes
Free Estimates
Yes
Payment Options
Check, Visa, MasterCard
Senior Discount
No
Emergency Service
Yes
Warranties
No
All statements concerning insurance, licenses, and bonds are informational only, and are self-reported. Since insurance, licenses and bonds can expire and can be cancelled, homeowners should always check such information for themselves. To find more licensing information for your state, visit our Find Licensing Requirements page.