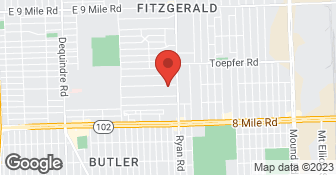 We are a multi outdoor service company. We have always offered our customers superior quality with very competitive prices. We accept Visa, Master Card, American Express, Check, and Cash. Call today for a free estimate....

Quality work, you will be happy with my work. If you have any questions, call me 586-480-6090. 15% off your first payment. Gutter cleaning,Gutter Guard installation, asphalt roofing,leaf removal/fall clean up and pressure washing.

Here at BCM Roofing, we strive to provide quality work and exceptional customer service. BCM has no pushy sales people, no leaky trucks, and won't leave a mess behind after the job is done. We strive for 100% customer satisfaction, and it shows. We want to give you the best price possible and offer up only quality craftsmanship on every job. We handle everything from mold problems to structural repair. We can fix any leak, and provide a preventative maintenance program. If you need other work, we can help, or refer you to a professional. Contact us today for a FREE estimate on your next roofing service! Ask about the BCM referral program offering Home Depot gift cards or check it out on the website today!

I cannot recommend this company.

DESCRIPTION OF WORK
Any Fence quoted a price of $7090.00, we gave him $$3545.00. He removed the existing back flower boxes said he would be back, but never returned. I did report his unprofessional ism to the Shelby Police department. Do not hire this man.

Jason Valuet, owner of Any Fence and Landscape out of Warren, MI (586-619-9242) was hired on 4/13/15 to repair fallen retaining wall and level out paver patio.  Name was provided by Menard's.  Job was estimated at $4600 and deposit of $2300 was given.  Completion was date was approximately three weeks.  At the end of April, I began calling to determine when the work would start.  The only thing th...

DESCRIPTION OF WORK
Jason Valuet / Any Fence and Landscape was hired to repair a fallen sea wall / retaining wall and re-do paver patio to level it out.  All he did was take money and not do the job.

He was going to start the work with out a permit, and remove fencing between my and my neighbor's yard. Neither of us were sure who the fence belonged to. So, I canceled the job and asked for my deposit back. Originally he told me that he would give me all but 20% back. I explained to him that no work was done, so I wanted all of my money back. He agreed to mail me back my check, but I never got i...

DESCRIPTION OF WORK
I hired him to build a privacy fence.

I ordered a fence and signed a contract. I gave them half down for the fence. They said it would be up in two weeks. After the two weeks it was up and I the claimed that they orded the wrong fence. This was about 30 days out when I gave them half down. At this point I lost confidence and told them to refund me and send the fence back. After three months I have no fence and they have not refunded m...

DESCRIPTION OF WORK
They were supposed to install a fence.

IF IT'S OUTSIDE WE CAN DO IT