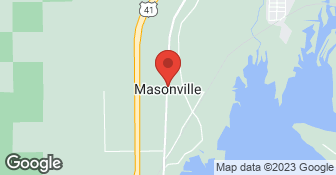 Don't get there services!  There are other Drain Cleaning companies that are way better and not trying to rip u off!!  They were too busy to come out and my biggest mistake was calling A-1 Drain Cleaning!!!!!

DESCRIPTION OF WORK
Called and talked to the owners wife, asked how much it was to clean my drains and she said $75.00.  So I made an appointment with them for four o'clock p.m.  They did come on time, I had to run water from my sink of course during the cleaning, when the serviceman came to up and said it's taking longer ... that was fine. I gave him a check for $75.00 and he said oh no, it's not $75!  It's $75.00 per hour plus our travel time to and from Rapid River!  I said what?  That is not what they told me!!!  He did himself admit that they needed to tell people the correct price of things before we come out!  This has happened many times before he said.   He encouraged me to call them the next day..and they do not garantee there work!  So I did called and talk to the woman and she denied the whole thing, and I asked her about the garantee on there work and she said, we don't garantee our work because it's your fault if u mess up our work?  Wow she says, this is the first time in 8 years that we have had a complaint!!  Bull&@%*  Do u know how many people have a budget and especially older people?  U tell someone $75, then u better stand by your quotes!  This is a way to rip people off!  I told her I will never call u again and I will let people know of your terrible rip off tacktics!!  And then they just come walking with there sewer boots on right into my clean kitchen floor!  I had to give them a buck of bleach water and mop to clean up there mess down stairs!!  And then I had to redo it all over anyways!!  A-1 Drain Cleaning is u have to lie and trick people to make money u should not be in business!!!!!!!!!