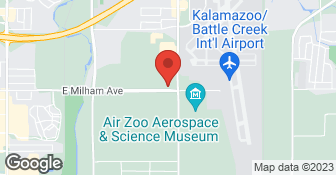 Worst experience with a contractor ever. It took them about 22 weeks to get one door installed. Ordered mid April, told it was done (it was a custom door) and in warehouse by the end of June but no install date until the end of July. The first scheduled appointment was about 12 weeks after we ordered. They canceled that day due to weather but I have pictures showing it was sunny. I even have a tex...

The install crew were good and efficient. However the roof vents were installed were NOT the venting system the salesman and I agreed upon. I was supposed to get ridge and hip vents and got big ugly can vents. Not one other home within view of mine has those big ugly things. The job was completed when I was out of town or that would NOT have happened. Now Hansons wants to fight to the bitter end t...

The sales person arrived a little early and after measuring the house sat down to discuss the siding plans.  He came up with a bid right then and there which we thought was very high. When we hesitated he began to add discounts.  We still hesitated because we wanted to see and understand exactly what we were buying but he did not even have examples of the siding we were interested in.  He continue...

Started out with a sales lady that was very professional and knowledgeable, but quickly turned ugly when the crew showed up. The crew left our roof unfinished one evening and it downpoured that night leaving us with a flooded house. The (so called) crew and a GM of Hansons came out the next morning to see the damage that was done to the inside of our home. Their solution was to get some good paint...

Waited MONTHS to begin work, which was now in the dead of winter.  Crew members no-showed causing job to take weeks. Several problems with workmanship: 1.  Roof removed and not properly covered, snow melt leaked through ceiling. 2.   Left a 2x4 bolted to the dormer on the upstairs bathroom--still there today. 3.  Tons of nails left in driveway.  I bagged several and gave them to Hanson's at the Mi...

DESCRIPTION OF WORK
In August of 2014 Hired Hanson's to replace aging roof on 1940 home.   We had lower bids on the job, but chose Hanson's because of the professionalism of the sales staff and promises of quality work.

General Information
Bonded
Yes
Insured
Yes
Free Estimates
Yes
Payment Options
Check, Visa, MasterCard, American Express, Discover
Emergency Service
Yes
Warranties
Ask for Details
All statements concerning insurance, licenses, and bonds are informational only, and are self-reported. Since insurance, licenses and bonds can expire and can be cancelled, homeowners should always check such information for themselves. To find more licensing information for your state, visit our Find Licensing Requirements page.

Renewal by Andersen of Grand Rapids