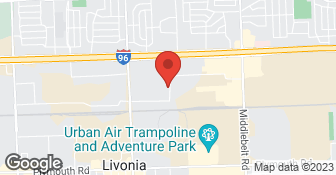 The owner Clay is very knowledgeable and was very helpful. The work was done to specification. We opted for blown in insulation over foam in the garage ceiling because foam was 4-5 times as expensive. We were expecting the job complete on Monday - But only the first spray foam (rim joists and cantilever) guy shows up - nothing from 6i before then. I emailed them and they say their guys will be out...

DESCRIPTION OF WORK
Spray foam and blown in cellulose

DESCRIPTION OF WORK
They removed old insulation, and then put in new insulation. They patched up holes, as well.

Novi Insulation was very responsive. They were very professional and treated our house with respect and left everything as clean as possible. Price was within range of the other quotes.

DESCRIPTION OF WORK
Their assessment was thorough. They were very helpful to create a customized solution to insulate our attic and to insulate the areas that couldn't be covered with blow insulation.

First thing I noticed was when I tried to speak to one of the group, only one spoke english and even he wasnt very fluent. When they finished it was obvious that there was still cold air coming in through my walls. I drilled several holes in my  interior walls and found areas where no insulation had been installed. I called Novi and they sent a man out. I showed him what I had found. He said he co...

DESCRIPTION OF WORK
They came out to blow insulation into my walls.

Novi Ins. sent a crew that did such a awful job that I had a represenative from N.I. and got nothing but excuses. I drilled holes into several area of my walls from the inside and found areas where there was little or no insulation installed. I pointed this out to the rep but still did not have the job done properly.All I wanted was a proper job to be done and got no where with them. I am very sor...

General Information
Licensed
NA
Bonded
Yes
Insured
Yes
Free Estimates
Yes
Payment Options
American Express, Check, Discover, MasterCard, Visa
Senior Discount
No
Emergency Service
No
Warranties
Yes
All statements concerning insurance, licenses, and bonds are informational only, and are self-reported. Since insurance, licenses and bonds can expire and can be cancelled, homeowners should always check such information for themselves. To find more licensing information for your state, visit our Find Licensing Requirements page.