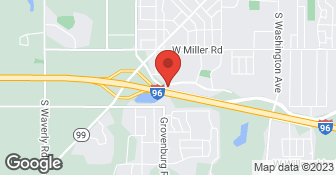 Home Wreckers Construction Company is locally and opperated. We have been in business for 10 years and provide a wide range of remodeling services. We employee 9 skilled carpenters to handle all of your project needs....

Quality drywall, painting and tile installation and repairs. Family owned and operated, attention to detail and quality is what sets us apart from the others.

We have been in business for thirty years. We currently are holders of the Super Service Award via Angie'sList. We take great pride and integrity in making our customers 100% satisfied with our products and services. We offer free estimates! We are fully licensed and insured. We offer five year workmanship warranty! Guilford Gutters is home to the "Big Mouth Valley Block." Please call with information on the company's patented product that will prevent water from running over your valleys!

Was part of homeowner association "upgrade" to the roofs of all of the garages in our complex. Home Wreckers were hired by the HOA to rip off, adjust, and reinstall the roofing of our garage. They got the roof ripped off then, with very obvious weather warnings, did not cover the garage roof adequately so rain water poured into our garage (as well as the adjoining neighbor) and completely soaked a...

DESCRIPTION OF WORK
Their name says it all

Work was done on time.  Work done was excellent.  Mike is sometimes hard to reach.  His work is top notch.  Have used him several times in the past.

Overall Mike and his crew did a fabulous job with our kitchen. As is the case with many contractors, punctuality, communication and scheduling were less than desirable. However, they completed everything they said they would in the end, just not in the timeframe promised. That was our only complaint. The quality of the work is exceptional. We worked with a kitchen designer and they constructed exa...

We signed a contract with Mike to replace all of the windows in our home in the summer of 2012. We paid half upfront as a deposit. Well, it's two years later, we have no new windows and Mike still hasn't paid us back a sizeable chunk of our deposit. We understand that he's going through some hard times but he has made no effort over the last 6 months to pay us back. He has stopped returning our em...

DESCRIPTION OF WORK
We've used Mike and Home Wreckers before and they've done amazing work (basement remodel, new roof, etc.). HOWEVER, Mike has gotten into some financial trouble, apparently, and has owed us a LOT of money for two years and it doesn't seem like he's ever going to pay us what he owes us. It's sad because he does great work but things just aren't looking good.

Good News: We have used them on a few jobs and except for some time issues have been very happy with the work. Bad News: We were going to have them replace 2 windows. Paid for them up front in April of 2013. Mike said he had to order them and they should be here in about 1 to 2 weeks. Have received a few texts from him saying that he has not forgotten us and would be getting back with us to arrang...

DESCRIPTION OF WORK
Was supposed to install 2 windows

We handle everything from new home construction to handyman srevices. We specialize in second story additions, ceramic tile showers, and custom cabinetry. Pleae call use for your free in hime Estimate today!