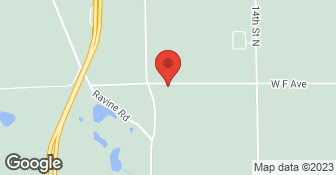 Phil does a FANTASTIC job!  We started using him last Fall when we put our old house on the market. We had previously used a competitor for years, but every time I called them, it was as if they had never been to my house before. When I called Phil this time, he remembered who I was, where our old house was and was very accommodating to the date/time we needed.  He works VERY hard and does a great...

DESCRIPTION OF WORK
Cleaned all carpets in house.

I could not believe how clean he was able to get that carpet!  It was amazing what how clean my boy's room was after his service.  When we moved out of our house, he cleaned out all the rooms and did a fantastic job.  I would never even think about using someone else.  He was in and out of there fast too!  Now in our new house the two dogs have to mark their territory of course, so Phil is coming ...

DESCRIPTION OF WORK
I have used Loedemann's a couple of times over the past 3 years.  The work Phil has done at my old house is nothing short of spectacular.  My son spilled ink from an experiment kit over the middle of his room.

Great, on time got the job done above my expectations!!

DESCRIPTION OF WORK
Great job at getting out some bad stains in my carpet.  Super nice and customer service oriented!!

I took advantage of a Groupon offer to purchase $80 worth of carpet cleaning for $40. I called to schedule an appointment with Phil and we scheduled it for about a week later. The groupon was good for one room and the other two rooms were an additional $20 each for a total of $80 spent to clean carpet in three rooms. Phil gave me instructions on what to do to prepare and what to expect, including ...

DESCRIPTION OF WORK
Had carpet in three rooms cleaned. One room has very light gray carpet with some pet stains and the other two rooms have a darker green carpet.

I tried to stay ahead of him moving things and vacuuming (again, I was ill, and ill-prepared) but Phil was on the job, finding and identifying stains that needed pretreatment. He showed me a few that may not be treatable but we agreed to give it a go. Keeping my naughty puppy confined with me, I checked periodically to see if he had any questions but he was zooming through his cleaning and had it ...

DESCRIPTION OF WORK
Phil is my hero! My very spoiled puppy objected to the concept of housebreaking - for TWO YEARS - but I had family coming to visit and had to get rid of the evidence. I was also prepping for very major surgery and had NO energy. Not only did Phil come on time and completely prepared to treat all the stains, he was so helpful in moving things I should have had out of his way before he got there. The carpet looks like new now, my sisters think I'm a better housekeeper than I am, and he even got a big patch of spilled paraffin cleaned up that I had completely forgotten about. I not only appreciate his work but he's a really nice guy and I would recommend him to anyone with naughty puppies and/or dirty carpets.

A
1 REVIEWS
ServiceMaster Of Kalamazoo