Roofing
Siding
Windows
Gutters
General Remodeling
Kitchen and Bath Remodeling
Decks and Porches
Concrete Pouring and Repair
Asphalt Driveways
Fireplaces
Masonry
Concrete Driveways
Awnings
Doors
Licensing
Bonded
Insured
All statements concerning insurance, licenses, and bonds are informational only, and are self-reported. Since insurance, licenses and bonds can expire and can be cancelled, homeowners should always check such information for themselves. To find more licensing information for your state, visit our Find Licensing Requirements page.
Business Details 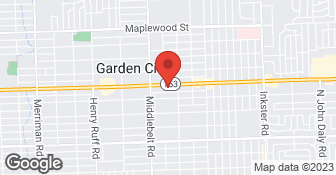 Chimney's, Porches, Tuckpointing, Brick/block installation and repair. Small local professional, serving a small area with enormous expertise. We do not sub-contract any work. Owner is on-site and hands on. 23+ years in Business.

JCJ Contracting Inc is your one stop solution for any structurally related need of your home or office. We take care of everything from indoor to outdoor construction work, with an approachable, personable demeanor and no small measure of expertise and earnest craftsmanship. Whether you’re in the process of sketching your dream home, or are dreaming up a remodeling project, our skilled craftsmen offer quality work through every stage of the process. From construction to remodels, we have the expertise and the resources needed to complete all your plans and projects affordably, efficiently and to your complete satisfaction. Additional emails - jcjcontracting1@hotmail.com, internetsales@jcjbuilding.com. See website for additional services offered. Additiona address - 785 W Michigan Ave, Saline, 48176.

At Slam Hammer Construction, we take pride in proving excellent service at a reasonable price. We are family owned and operated. With over 16 years of experience, we can complete any job you have from the cement footings to the roof and everything in between.

It was great , they always make it in a cheaper way. They did some mistakes which can't be corrected because the materials are cheaper.

DESCRIPTION OF WORK
They renovated our kitchen.

Ron Kroll came over to my house told me and my wife they would replace my windows in my home all the way to studs and install same size windows. They came over and installed windows inside my old window frames!! Then caulk around the frame!! They installed a smaller windows throughout the hole house! Worst job I ever seen! Ron Kroll is a cheat and liar! When Ron Kroll is done with your home be rea...

DESCRIPTION OF WORK
Installed windows at my home.

The original project went very well the roof was installed and the project was completed well. After several years of living in the house we needed to have six more windows installed and the skylight added to the roof area that have been completed. Alongwith the roff being patched where the chimney has been removed. After making a phone call in September 2017 to have the Additional work quoted wor...

DESCRIPTION OF WORK
Roof to be repaired and new windows / skylight

We hired Kroll Construction on October 31, 2016. We hired them to replace a regular roof with shingles and two flat roofs. We were promised that the work on all three roofs would be completed within 2 to 4 weeks. They finally came out about 6 weeks later and only completed the shingled roof, the day before the first snow storm of the season. The workers told us that they were not able to get the f...

DESCRIPTION OF WORK
Replacement of a shingled roof and 2 flat roofs.

Terribly disappointed!! Robert Ujkaj quoted a bathroom remodel for us at the end of 2016. Before I was able to call him back to notify him we'd be going with someone else (in all fairness, I preferred Kroll over the other contractor who came out, but their price was above what we were looking to spend) a representative was calling me asking if we had made a decision and if I needed anything else f...

DESCRIPTION OF WORK
I contacted Kroll for a quote for a bathroom remodel, essentially taking the room down to the studs. Job would entail gutting the room, moving the shower fixtures, relocating the toilet, replacing everything and adding cabinetry.