Garage Doors
Window Treatments
Decks and Porches
Skylights
Egress Windows
Licensing
Licensed
Insured
All statements concerning insurance, licenses, and bonds are informational only, and are self-reported. Since insurance, licenses and bonds can expire and can be cancelled, homeowners should always check such information for themselves. To find more licensing information for your state, visit our Find Licensing Requirements page.
Business Details 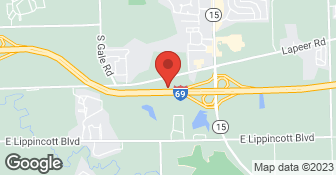 Here at Accent Garage Door, we are a family owned and operated company that values honesty and integrity and treats your home as if it were our own. We use American Made Parts, and offer a variety of quality Garage Door Installation, Broken Spring Replacement, and Garage Door Repair services. You will receive free lubrication with all service calls, and we offer 24/7 Emergency service. You will find us to be competitively priced with close attention to the details of each and every project that we are involved with. We look forward to building lasting relationships and guarantee your satisfaction! Get $100 off insulated 16' wide door if you mention this ad!

Dover & Company was founded on July 3rd, 1936 by Wilfred C. (Bill) Dover. After many generations, Dover & Company has remained committed to serving Mid-Michigan by producing the highest quality of products to our community. In 2014, Charles Richards and Zachary Shinabarger had the honor of acquiring Dover & Company. This opportunity has given them the chance to be a part of history by carrying on the branded legacy, increasing job growth within the community, and achieving significant levels of growth. Our mission is to be committed to being the premier provider of quality garage doors in Michigan. We are dedicated to providing superior customer service, innovation, efficiency, earning trust through knowledge, and exceptional work performance since 1936.

Called to determine and fix a leak in the roof. They came out and saw discoloring on the wood in attic. Instead of fixing the leak they wanted to sell me a $17,000 new roof. (I’ve had estimates by other reputable companies and all of them have been below $13,000). It ends up the leak was caused by a vent pipe that was easily replaced. Ends up I was charged $75 forI them to come out and give them t...

Contacted C&L Ward to repair a leaking door to the patio. Upon initial consultation, it was recommended we purchase a new door to remedy the situation (over $1000). After replacement the door still leaked and a new seal was recommended. The door still leaked. Different technician came to inspect the door and seal and told us the door "is as good as it's going to get" unless we get a new door and f...

Cannot speak to initial interaction, however THEY DO NOT STAND BEHIND THEIR WORK. I called about shingles rolling up on a corner of the house, after another roofer recommend that since they put the roof on, the work should be warrantied. Boy was he wrong. I called and they first stated that since I wasn’t the owner at the time, the warranty is VOIDED. They then booked me for two weeks out to fix i...

DESCRIPTION OF WORK
C&L Ward put a roof on my house in November 2011, under a previous owner.

Deposit was paid in June. Job was finally finished, in the snow, in November. The communication was horrible, both between the company and us and between the various departments. The project mgr never checked on the crew - the installation should have taken 1 long day. Instead it took 3 because crew only worked 1/2 days. The deck itself looks fine. Final trim work was sloppy. It took 2 more visits...