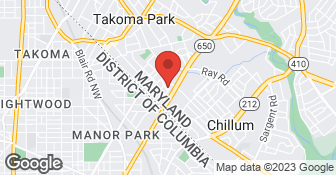 CHAMBERLIN-WASHINGTON INC., Your CAULKING & WATERPROOFING SPECIALISTS. Serving you since 1898, Chamberlin-Washington Inc. has grown into an established company, Accredited with BBB (Better Business Bureau), Licensed, Bonded, and Insured. Our Mission is: To provided high quality services and complete satisfaction to our valued customers and business partners....

IN BUSINESS SINCE 1979. 15 EMPLOYEES. All WORK IN HOUSE EXCEPT FOR FENCING. ALL EMPLOYEES DRUG TESTED AND BACKGROUND CHECKED. COST DETERMINED BY THE JOB. LICENSE #42490. INSURANCE #Q89-0102236-M. ADDITIONAL EMAIL: mark@eclandscapedesign.com.

Went very well. The company was a pleasure to deal with in all respects and did what they said, on schedule. It was a major job that involved excavating under a porch and extending drainage lines way into the back yard, completed over a couple of weeks. At the end of the project, I believed that the slope of a section of the reconstructed front walk was not quite right. Randy had his guys back out...

DESCRIPTION OF WORK
Excavation and exterior waterproofing of foundation wall on 3 sides of the house. Installed French drain, sump pit and pump, and downspout drainage lines.

I had a 50-year-old house with a cinderblock basement wall that had water slowly coming through. I researched the various firms that did waterproofing and had three highly rated firms come out for an estimate. The first contractor didn’t even bring a flashlight and just looked around and said to keep an eye on it. The second gentlemen did provide detailed estimate and carefully explained the probl...

Our house is SO much warmer! What a huge difference this has made. Crew was professional, on-time and did a great job. Office staff was responsive in letting me know when weather necessitated a schedule change. And I got a phone call after the work was done (and BEFORE the invoice arrived) asking if I was satisfied with the work. Thank you!

DESCRIPTION OF WORK
I originally called to have an estimate to waterproof the basement, which the estimator said was unnecessary. He did, however, point out that the poor condition of the exterior caulking was allowing water into the house. (This had not been done since before we owned the house). Chamberlin-Washington re-caulked all the doors and windows on the exterior of the house.

They did a great job. They responded very quickly. They were very knowledgeable. They basically explained everything they had to do. They got it all done very efficiently. I think they saved me a lot of money because they were able to identify some other issues.

DESCRIPTION OF WORK
We used Chamberlin-Washington.

CWI was great.  My basement flooded because my sump pumps didn't work.  (I don't know anything about these things and hadn't touched them for 10 years since I bought the house.)   CWI came out soon after I called them and inspected my basement.  They found the 2 sump pumps I had were not working and gave me an estimate to replace them.  The estimate was less than what I might have expected after d...