Wedding Planning
Travel Agencies
Bridal Shops
Licensing
No License Required for Trade
Bonded
Insured
All statements concerning insurance, licenses, and bonds are informational only, and are self-reported. Since insurance, licenses and bonds can expire and can be cancelled, homeowners should always check such information for themselves. To find more licensing information for your state, visit our Find Licensing Requirements page.
Business Details 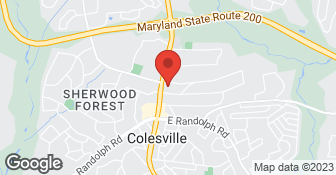 Colesville Travel, LLC is a full-service travel company and has been in business since 1992. Our reputation for excellence is earned every day by providing the ultimate in value and personal attention. Our goal is to provide you with the best experience every time you call our offices. Our well-traveled and experienced consultants can book you to any destination around the world. We have access to a wide range of travel possibilities, all at the best prices, making Colesville Travel the perfect place to begin every trip you take. We strive to make travel simple, worry-free, and fun for our corporate and leisure customers alike. Your complete satisfaction is only the first of our goals. We want every travel experience to create memories that will last a lifetime....

SERVICES ARE COMPLIMENTARY for vacation packages only. There is a $35 processing fee for domestic airline tickets per person and a $50 processing fee for International airline tickets per person. A $50.00 consultation non-refundable fee per person will be collected prior to personalized travel services. Personalized travel services includes: extensive travel arrangements within Europe/USA/Canada/Hawaii/Caribbean and beyond. HCB Travel is a Secured Preferred Travel Partner with Sandals Resorts, Disney Vacations, Universal Studios, ALL Major Cruise Lines, ALL Tour Operators, Airlines and providing many additional Travel opportunities. Visit www.hcbtravel.com today to reserve your next Adventure. It's our pleasure to assist you....

I signed up with a group for a Las Vegas weekend through this agency.  Soon after signing, it became evident to many in the group that the price charged was exorbitant and arrangements could be made for less individually or elsewhere.  As members began cancelling their reservations, Cindy informed remaining travelers that the group minimum would need to be met by splitting the cost among the remai...

DESCRIPTION OF WORK
Group reservation for weekend trip to Las Vegas.  Price: Group price was based on RT non-stop travel to Vegas over MLK 2013 weekend.  Cheaper price was available directly from the Southwest website. Quality: Quality of interaction was poor.  Responsiveness:  Vendor DID respond to email.  Responses were often delayed, irrelevant, incomplete and/or non-responsive. Punctuality:  See above.  Professionalism:  Thus far, vendor has continued to promise refund and appears to be in business.  I figure continued, non-profane, response gets at least a D rating.  Complete failure to respond or use of profanity would have gotten an F rating from me.

We specialize in groups, international travel, destination weddings and honeymoons. We do girlfriend getaways, family reunions and bus trips to NYC to go shopping and see exciting new plays. We can handle an intimate party of two to large groups. We offer a variety of travel packages to fit your needs and budget. All of our packages are designed to make your planning and travel experience easy and stress free. We take all major credit cards and can setup affordable payment arrangements.