Lawn and Yard Work
Leaf Removal
Lawn Fertilization & Treatment
Landscaping
Pavers and Hardscaping
Mulch and Topsoil
Gutter Cleaning
Snow Removal
Tree Service
Hauling
Licensing
Licensed
Insured
All statements concerning insurance, licenses, and bonds are informational only, and are self-reported. Since insurance, licenses and bonds can expire and can be cancelled, homeowners should always check such information for themselves. To find more licensing information for your state, visit our Find Licensing Requirements page.
Business Details 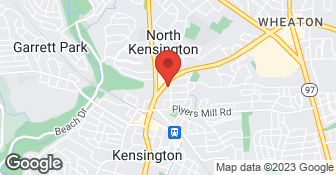 BAM'S Landscaping is your premier lawn care and landscaping provider in the Montgomery County region. We are a legally-operated, community-oriented, customer driven business specializing in turf care and landscapes but provide a range of other complimentary services....

Lip's Persnickety Lawn Service LLC is based in Clinton, MD, 20735. We have more than 15 years of experience in Landscaping and Lawn Care services. If you need professional Landscaper, do not hesitate to call us now Lawn Care, Lawn Care Contractor, Lawn Care Company, Commercial Lawn Care, Residential Lawn Care

Centerscape is a DBA. We are incorporated as Frank M. Noto & Associates, LLC. We are a small, one crew company, focused on providing outstanding quality at reasonable cost. Proprietor Frank M. Noto, a "young" 60, has over 40 years experience in the construction and landscape industry. Frank earned a Bachelor of Science in Ornamental Horticulture in 1977, and has managed growing operations including greenhouse crops, and container and field-grown landscape materials. In 1985, Frank was recruited by The Rouse Company, a nationwide developer of commercial real estate, including the city of Columbia, MD, to serve as Landscape Manager, and later served as Director of Landscaping for 13 years. During his tenure at The Rouse Company, Frank traveled extensively, and managed the development and installation of over $100,000,000. worth of landscape/hardscape projects. Frank benefitted from his exposure to top industry professionals across the country. When The Rouse Company was sold in 2003, Frank decided that his traveling days were over, and began a new career in Montgomery County, MD. Frank's philosophy on work is that a job worth doing is a job worth doing right, and will expend whatever energy is required to achieve that end.

They did a careful and professional job.

DESCRIPTION OF WORK
A Bam's crew cleaned the landscaping in my yard by trimming bushes and removing overgrowth.

Thank you for taking the time to review our company and for your business!
A

Last Summer (2015) my backyard was taken over by ivy (including Poison Ivy) that was climbing the neighbor's fences (complaints from the neighbors) and choking the trees. I tried to pull up the ivy -- back-breaking work and I got a poison ivy rash.  BAM Landscaping sent 2 guys that spent 2 days pulling up all the ivy (by hand), covered the land with plastic to make sure it was all killed, and then...

Thanks so much for your testimonial of our services! We appreciate your business and look forward to continuing to service your property to the best of our abilities!
A

I'm a fairly new client of BAMS. Since the beginning, they have provided excellent service. The lawn is beautifully cut and trimmed, and clean up is exceptional. On the occasions I've called the office I have always received excellent service. BAMS is always prompt with their reply, either by phone or email, and it's clear my satisfaction is their biggest priority.

Music to our ears! Thanks so much for taking the time to write this review and supporting BAMS Landscaping!
A

We have used BAM’S for several years and found them to be very reliable.  They are flexible in their services and very responsive to customers.  Unlike several other services we have used there is never an issue with billing or payment.

Great news! Thank you so much for this kind review of our services provided to you. We will strive to continue to provide you with an exceptional service!