Window Treatments
Hardware & Home Improvement Stores
Home Automation
Licensing
No License Required for Trade
All statements concerning insurance, licenses, and bonds are informational only, and are self-reported. Since insurance, licenses and bonds can expire and can be cancelled, homeowners should always check such information for themselves. To find more licensing information for your state, visit our Find Licensing Requirements page.
Business Details 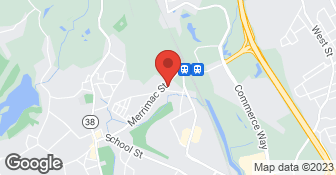 This is our 26th year in business. We have 9 employees. We do not have a showroom. Please visit our web site. We bring samples and ideas to you! We service all of New England, NY, the Islands and have traveled as far as CA. We provide products and services not readily available to the general public!...

Aztec provides complete solutions for commercial and residential clients. We can provide complete turnkey solutions for your home or business. Our goal is to allow our customers to benefit from today's technology with ease and comfort. We are expert System Integrators, which means we can take much of the various and mismatched technology that exists today and integrate it in a way that is easy to work and easy to use. When you hire Aztec, you will always get the same technician that is familiar with your setup, we don't use sub contractors - ever. We are always happy to come out for free to look at your project and give you the best price with the best options available, we do not low ball you to get the job then add in all of the things that should have been in there to begin with. Many of your customers appreciate that we provide a complete system, not a cheap one that they keep having to throw money at until it finally works.

Here to help with all of your electrical needs. Give us a call today!

As the country depends more and more on computers and other forms of automation to make life easier, dependence on electricity sees an equal increase. So when some part of your home’s electrical system begins to malfunction, you need a team that can correct it efficiently, and you need to be able to trust that the job was done right. The team at Sylvester Electric knows that this trust is extremely important, because of the potential for hazards in the event of poorly done work. However, their team of Dracut electrical specialists have been serving their community for over 30 years, and they are highly skilled in all aspects of electrical work. From home safety inspections and maintenance to outlet repair and breaker replacement, even wiring and installing things like ceiling fans, generators, lighting fixtures, and home theaters, this team is committed to providing the best possible quality in all work they perform. Call today to find out more about how they can help you!

I had originally tried going with a company called Smith & Noble because I had received a coupon, but their process was super convoluted and involved sub-contractors and multiple initial appointments which were annoying for me as it's hard to get home during the work day. I finally gave up on the whole process after they failed to mail me samples, and the "interior designer" couldn't get on the sa...

DESCRIPTION OF WORK
We had custom shutters installed on 2 bathroom windows.

They claimed to be and quot;neurotic perfectionistsand quot; in a flyer that came with the mail. It was an interesting pitch, so I got an estimate to make interior shutters for my house. Without a doubt, they lived up to their claim. In addition, they were consistently punctual, professional, and very pleasant to deal with. During the preparation process, they freely made house calls whenever I ha...

DESCRIPTION OF WORK
Custom shutters, blinds, and canvas shades for the first and second floors.

I contacted Back Bay Shutter in late 2011 and Steve promptly responded and scheduled a site visit. During the visit, Steve explained everything, including material and style options, leadtime, and installation. After the visit, Steve emailed me a detailed proposal, followed by a contract. Once I signed the contract, he scheduled my job. During the several months leadtime to the job start-date, Ste...

DESCRIPTION OF WORK
The job: Installation of solid panel, interior shutters in six windows Steve of Back Bay Shutter Co. met with me and measured six windows. He explained material, finish and hardware options. He told me what the leadtime would be once I signed a contract and provided a 50% deposit. After the visit, Steve emailed me a detailed contract that outlined the options and associated costs. Upon execution of the contract, Steve scheduled my job. On the scheduled date, two installers from Back Bay Shutter Co installed the shudders. After the installers completed the job, Steve inquired by email if I was satisfied with the job and experience.