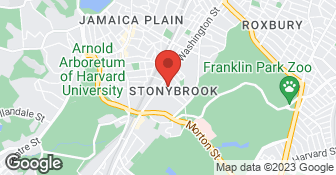 ALEXANDER DOYLE CO. is a fully licensed and insured company. We are profficeint in all types of roofing including copper, slate, shingles, rubber, standing seam, tar & gravel. We also clean, repair, build chimneys, and do all types of gutters including aluminum, copper and wood. I am also on the Advisory Council for Certainted Roofing Products. EPA R-I-18398-10-08026 exp. June 24 2015. Weather Bond Rubber roofing Certified installer all enployees are OSHA 10 Training...

At MRW Masonry, Restoration & Waterproofing, our mission is to handle our customers‘ masonry, landscape construction, basement waterproofing, chimney repair & repointing, patio, step work, and more with dedication and commitment to excellence. Our owner is on site for every project to ensure each one gets the experience, and attention to detail it deserves. We're not done until you are happy! Please call us today to schedule your free estimate - (617) 412-7696

Founded in 2002, M-FAL MASONRY INC. brings over a decade of experience and craftsmanship to task on new residential and light commercial construction, as well as handling masonry repairs and remodeling projects. If your project involves concrete, brick, block or stone then you should give us a call. We take pride in all aspects of our work - from our timely communication to your finished product. Give us a call and be our next satisfied customer!

MasonWorks specializes in design and construction of all types of stone and brick patios, walls and walkways, steps, decks and porches, outdoor kitchens and water falls, garden and retaining walls. From the first consultation to the final touches of each job, you will be in excellent hands. With more than three decades of experience, MasonWorks will assist you in every stage of the project, from materials choice to furniture selection. Your dream of owning an elegant and relaxing backyard retreat can become a reality. Family owned. Additional contact name - Jeff Souza. Additional e-mail - jeff@masonworks.me. Angie's List Award winning since 2009. Additional area served- Boston Metro, North sure and West

The problem with this company is their attitude and lack of customer service. The first time I called recently and spoke to Jennifer in the office, she said that someone would call me back. Five days later having not heard from them, I called again. A day later Alexander Doyle called me. He was argumentative from the start. He informed me that he had been to the house to look at it earlier in the ...

DESCRIPTION OF WORK
Six years ago Alexander Doyle replaced the roof on our triple decker. While his bid was the most expensive of the 3 we received, we went with him because he said that he would guarantee his work for 10 years. Since the roof was replaced, when it rains water now runs off the back porches and also off the front of the house, instead of the side where the house is pitched. This may or may not be due to his roofing work; we haven't been able to determine this yet.

It was great, he returned my call the next day. His guys came and had the project finished In two days. They cleaned up nicely. My only issue I asked for an estimate on a smaller side project and have not heard back.

DESCRIPTION OF WORK
Repaired a roof

Alexander Doyle was a pleasure to work with. He viewed roof damage the same day he contacted us and had a crew onsite 8am the next day which happened to fall on a Saturday. The roofers were polite, patient with my questions and extremely tidy. They examined the entire roof to make sure there were no other issues. Highly recommend Doyle LLC.

DESCRIPTION OF WORK
Repaired shoddy roof work done by previous roofer which was falling apart after only eight years. After the previous roofer told us that our warranty had expired, we called Alexander Doyle. We would give an A++ rating to him if we could.

He did his work and it was fine. They did a good job. My gutters were clean. The price was good.

DESCRIPTION OF WORK
I have used a Big Deal for Alexander Doyle for gutter cleaning.

I had purchased a deal to get my gutters cleaned, but was called later by an employee and told they do not service my town.  Their page could be more explicit on the service area, but Angie's List should also have some functionality for not making offers that cannot be completed.  My payment was quickly refunded.

DESCRIPTION OF WORK
I purchased a deal to have my gutters cleaned, though the work was not completed.

all types of roofing