Not Rated| 18 Reviews
Request a Quote

Masonry
Chimney Repair
Concrete Pouring and Repair
Fireplaces
Pavers and Hardscaping
Stone and Gravel
Landscaping
Licensing
All statements concerning insurance, licenses, and bonds are informational only, and are self-reported. Since insurance, licenses and bonds can expire and can be cancelled, homeowners should always check such information for themselves. To find more licensing information for your state, visit our Find Licensing Requirements page.
Business Details 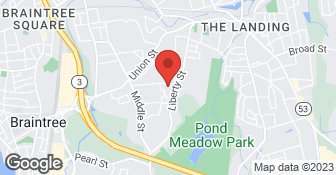 We provide the highest quality landscaping services and products at affordable rates. Needle Brothers Landscaping offers fast, friendly and courteous service. We use only the highest quality equipment and maintain a skilled staff to answer all of your questions. We have built our reputation on our commitment to providing quality service, which has earned us many valuable customers. Needle Brothers Inc. offers many services from lawn maintenance, masonry to fence supply and installs. We also offer Spring and Fall Clean-Ups. Please take a moment to browse through our site to learn more about our company and how we can serve your landscaping needs. We look forward to hearing from you soon! We serve many communities on the South Shore including Braintree, Hingham, Hanover, Norwell, Abington, Quincy, Milton, Weymouth and many more.

At MRW Masonry, Restoration & Waterproofing, our mission is to handle our customers‘ masonry, landscape construction, basement waterproofing, chimney repair & repointing, patio, step work, and more with dedication and commitment to excellence. Our owner is on site for every project to ensure each one gets the experience, and attention to detail it deserves. We're not done until you are happy! Please call us today to schedule your free estimate - (617) 412-7696

It started out really well.  However, the day that the bulk of the work was being done we received a call (after the work was done) to let us know that without consultation or even an attempt phone call, the design of the stairs were changed.  We now have small landing... With this change in design was a proposed increase in price.  I called and explained that this was not agreed upon and as consu...

DESCRIPTION OF WORK
Provider demolished and re-built back stairs.

Rave reviews.  When the present owner's father installed my walkway and walls over 25 years ago, this man worked on the project and actually remembered coming to the house.  I could NOT have been happier.  Mr. Spero came to my house to look at the pillar and agreed to do the repair for which he charged $100.  (This may have included replacing the stone which was less than a 20" square.)  The point...

DESCRIPTION OF WORK
MJ Spero replaced a small cap on a pillar at the end of my driveway.  It had come off after 25 years of wear and weather including snow piled onto it by sidewalk plows.  He also replaced a wide step of Indiana stone that had cracked on my front walkway.  The step was 25 years old as well and I'm sure the person who shoveled this walkway had used an ice chopper which weakened and probably caused the crack.

Michael told me it would be 2 weeks until he would begin my job, but it ended up being 4 weeks. This was partly due to the rain. I was told it was a 2 day job and it was only 1 full day and about 2 hours the next day, which was great. The took down my wall and rebuilt it using the same stones. There were just a couple of things that bothered me. First, Michael mentioned to me 3 times that either w...

DESCRIPTION OF WORK
Spero rebuilt about 18 feet of my front stone wall. It was falling down due to 30 years of ivy growing over/through it.

It could have gone any more smoothly with them. He (Michael) was able to answer all the question that were brought up calmly and clearly. Aside from the rain the job was done faster than I expected. Will call him again, when another masonary job arises.

DESCRIPTION OF WORK
They removed a eighty year old walkway that was cracked and falling apart and replaced it with a beautiful brick and blue stone walkway.

Call on 6/17 to get a quote to repair chimney and repair loose step. They came ut on 6/17 and gave me a quote to complet the work. I call to arrange to have them do the work at that time he said they would be out in 2 weeks.They called on 6/26 to arrange to start work on 6/27 at 7:45. They worked all day on he 27th and finished on the 28th. The work was more than expected for the chimney and front...