Chimney Repair
Chimney Caps
Masonry
Chimney Sweep
Stucco
Concrete Pouring and Repair
Licensing
All statements concerning insurance, licenses, and bonds are informational only, and are self-reported. Since insurance, licenses and bonds can expire and can be cancelled, homeowners should always check such information for themselves. To find more licensing information for your state, visit our Find Licensing Requirements page.
Business Details 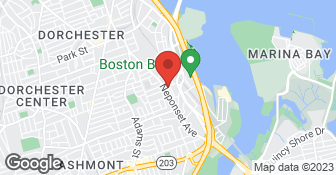 Bob Wolusky chimney and masonry Co. is a full service company. We do all the work. Construction supervisors license. workers comp and liability ins. we accept business and personal checks, cash. We do not accept credit cards....

With 15 years' experience in the business I pride myself on my professionalism, as well as my ability to complete each project to the homeowners satisfaction. We handle general contracting in Norwell and the surrounding areas. Call today!

We specialize in all Driveway, Patio, and Masonry services. Please contact our office today to schedule your free estimate 781-855-5540.

Bob was extremely difficult to work with and had no customer service skills whatsoever. He had me pay him site unseen and never provided an invoice or warranty information. During the consultation, I asked him to also re-point the front steps as the railing is loose and he told me he would "throw that in for free". When I asked him to modify the estimate to include this work, he said "not to worry...

Two workers showed up promptly and on time, and were very polite. They climbed onto the roof with a hose and sprayed water on the chimney until they confirmed that the water was in fact leaking from cracks in the crown. I was told I would hear back from them in a couple of days with an estimate to do the job. Two weeks later and after leaving them a message I still have no estimate. Which leads me...

DESCRIPTION OF WORK
Charged me $250 to confirm location of Chimney Leak.

(removed member name), I take full responsibility for not getting back to you, if I am guilty of anything its poor office skills, I E not returning your call. Your initial call to me was to have your flashing replaced due to a water leak, I suggested my men diagnose the water leak using a hose to check where the water was getting in, the flashing first ,then the body of the chimney then the crown,...
A

The owner was very accommodating of my schedule and assessed the project himself, accompanied by the employee who was to do the work. The employee was skilled and hard-working and completed the project satisfactorily. The chimney looks as good as new.

DESCRIPTION OF WORK
Repaired crumbling brick at base of chimney

They did a great job. They were prompt, on time, took pride in how they left the place and were very knowledgeable. Their professionalism and cleanup was very good. Their price was very fair. They were very good.

DESCRIPTION OF WORK
Bob Wolusky did chimney sweep and installed a new clean out door.

Everything went well from beginning to end. I talked to Bob Wolusky and he sent Jason to to the house to give me an estimate on the work. Jason came on the date agreed to and on time. He completed the work and it looks great. I would absolutely go back to Bob Wolusky Chimney when I get the chimney repointed.

DESCRIPTION OF WORK
Blocked up unused fireplace to stop drafts.