Landscaping
Handyman Services
Gutters
Gutter Cleaning
Garbage Collection
Framing
Flooring Sales and Installation
Drywall
Unfinished Carpentry
Licensing
Insured
All statements concerning insurance, licenses, and bonds are informational only, and are self-reported. Since insurance, licenses and bonds can expire and can be cancelled, homeowners should always check such information for themselves. To find more licensing information for your state, visit our Find Licensing Requirements page.
Business Details 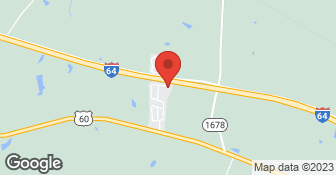 We work as a small home contracting company that employs four handymen that are skilled in many different fields. We are a licensed contractor that work in home repair and Rehab's. We work with the home owner on billing to keep costs down and to make sure jobs are completed on time....

Born from the inventive mind of Gary Knudson of Knudson Manufacturing in Broomfield, Colorado, the K-Guard® concept was established in 1996 and first manufactured in 1997. Knudson’s experience with designing gutter machines began when his career did—working for his father out of their garage in May of 1965. In 1970, Gary took the helm at Knudson Manufacturing and has processed and received over 100 patents since. One of the most innovative of those designs is the fully engineered two-piece leaf free K-Guard® system, featuring a fully supported gutter and hood, a hidden patented hanger system, with improved aesthetics and additional strength as compared to similar systems on the market. K-Guard® received patent and signed its first licensee in 1998 and has been providing unprecedented home drainage systems ever since.

We are a veteran owned company that specializes in all exterior remodeling which includes seamless gutters, gutter protection, soffit, fascia, siding, and trim work. We are Kentucky breed, we pride ourselves in giving the best quality products and services. We do not do repairs.

Have you hired Custom Home Services? Be the first to share your experience and help other people looking to hire this Pro.

We provide services in home repair and in home additions as well as Rehab's. Our handymen can service kitchen, bath, and basement renovations. We also repair different types of roofs and install new additions to roofs. With equipment ready for debris removal, we can clean out garage, basements and yard debris. We can handle most home repair needs with any electrical, plumbing, and HVAC sub-contracted.

At this time we do not cover any foundation repair or major concrete work. Any work that we don't cover we can sub out to trusted contractors in that field.