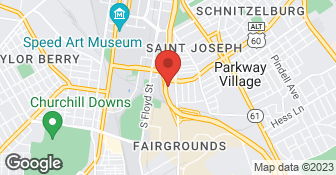 Allen Electrical has of proven track record of quality residential electrical services in Louisville and Southern Indiana for over 25 years. We are members of Better Business Bureau and Home Builders Association of Louisville. Our electricians are licensed and insured in Kentucky and Indiana. We retain several master electricians on staff to ensure that all installations and repairs are performed to code. We are committed to providing quality, cost-effective and timely service to our customers! Locally owned and operated. Additional DBAs - Allen Electrical Services, Allen Electric Company.Additional phones - (502) 585-4530, (502) 636-0625, (502) 636-0823, (502) 636-0836, (502) 636-4357....

Proudly serving Louisville, Brandenberg and the surrounding areas! With over 30 years experience, Alpha Electric has the skills to handle any of your electrical projects. Residential/Commercial fully licensed&insured. BBB Accredited!

Comfort Zone Heating and Air Conditioning provides sales and service for all makes and models of heating and air conditioning systems. We are a family owned and operated business with over 30 years of experience in the HVAC Industry. Call us today and see what our thousands of customers already know. You have found the only HVAC contractor you will ever need!

Allen Electric came very highly recommended and rightly so. Daniel and Dylan were early (which I LOVED!) and very courteous. They explained everything they were going to do before they did it and answered every question I had about the whole process. I knew exactly what the price was before they started even a second of work. And there were no surprises at the end. They even had to crawl into a su...

DESCRIPTION OF WORK
We needed a new breaker box installed for a new electric water heater.

I've had them out here twice because they warrantied one ground vault plug they put in and we had them work on a ceiling fan. Put light in that kind of stuff, hardwired up a thing for my stop pack. Put a heater in here and the ground vault. That's about the only thing they've done in a while. We had them put in some can lighting and fix 2 ceiling fans and to work on that ground vault was about $60...

Electrician was good and quick to diagnose. But, the price was way too high. Charged $250 for literally 20 minutes of work. He found a bad wire in the light fixture so just replaced the one wire. He said he wished he could lower price, but they have a strict price sheet and he had to go by it.

DESCRIPTION OF WORK
Had a light switch that started tripping breaker each time it was turned on.

Our electricians are not just good, they are awesome! It is virtually impossible to have one of our wonderful CSRs take your call, provide you with a Same Day service appointment, have our certified technician remove/reinstall your dimmer, remove your ceiling fixture, locate the short, repair it and subsequently reinstall your ceiling fixture all in under 20 minutes. Initially we quoted an Up-Fron...
A

I have had them out several times. I am basically happy with them.

DESCRIPTION OF WORK
They rewired one of my lights in the garage. They took it off a line and gave it it's own line so that I could install a flood light camera.

Initially, there were no problems. The outlet was installed and working. The electrician was polite and seemed competent. Later, another electrician came out to fix another kitchen appliance and pointed out a problem with the wiring leading to the plug - the junction was totally exposed. This may have originally been done by the previous homeowner, but Allen electrical tied into this problematic j...

DESCRIPTION OF WORK
We had a switch that operated a garbage disposal. We asked for an outlet to be added so the disposal could be unplugged.